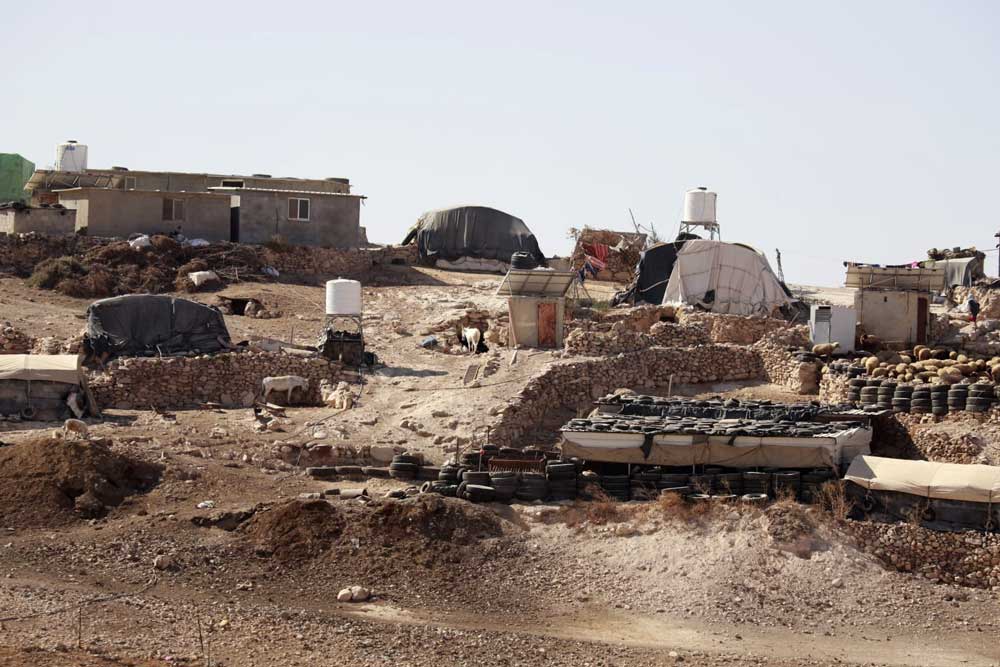 THE KHIRBET AL-MAJAZ COMMUNITY IN MASAFER YATTA. PHOTO BY B'TSELEM\BREAKING THE SILENCE

The representatives of 17 countries, including EU members as well as other countries, visited on Monday Palestinian communities in the South Hebron Hills, whose residents Israel is seeking to expel, and warned against Israeli ethnic cleansing plans.

B’Tselem said in a press release that Since 2000 the residents have been waging a legal struggle in Israel's High Court of Justice. Last August, before the last hearing in the case, the Akevot Institute for Israeli-Palestinian Conflict Research revealed a document that proved what was already clear: Israel had declared the area a firing zone to facilitate the expulsion of its residents. The judges ignored that information and around 1,000 residents are awaiting a forthcoming ruling by Israel’s High Court of Justice in the latest petition in their decades-long struggle against Israel’s attempts.

On the tour were representatives of the EU and of member states Germany, France, Spain, Italy, Netherlands, Sweden, Finland, Denmark, Belgium, Austria, Hungary, Poland, and Ireland, as well as the UK, Norway, Switzerland and Canada, which concur with the EU’s position that the Israeli settlements in the West Bank are unlawful and that Israel’s policy of forcible transfer of Palestinians is unacceptable.

At the village of Khirbet al-Majaz, the participants visited the local school, built with EU funding, and meeting community leaders along with Nidal Younis, head of the Masafer Yatta local council, and Nasser Nawaj’ah, a resident of Susiya and Field Researcher for B’Tselem. The tour was organized by Israeli NGOs Breaking the Silence and B’Tselem.

Breaking the Silence Executive Director Avner Gvaryahu said: “We have come here today to announce that we will not stand by while the State of Israel declares hundreds of people illegal residents in their own homes. We will not stay silent when soldiers are sent to expel people from their homes, in which they lived long before the first Israeli soldier set foot in the West Bank.”

“We invite everyone to come here with us and look these people in the eye. That is more than the policymakers, who are forcing entire families to live in constant fear of being driven out of their homes, have ever done. This is expulsion. This is occupation”, added Gvaryahu.

B’Tselem Executive Director Hagai El-Ad added that “Israel has coveted Masafer Yatta for decades, viewing it as an area ready for exploitation were it not for what it perceives as the fly in the ointment – Palestinians who live in the area. The state wishes to expel all these families, demolish their homes and destroy their livelihoods, on one pretext or another. Declaring the area a firing zone was the excuse; cleansing the territory of Palestinians is the goal. This criminal plan must be stopped.”

Data by Israeli human rights center B’Tselem indicates that in the early 1980s, the Israeli military declared an area of about 3,000 hectares in the South Hebron Hills known as Masafer Yatta a restricted military zone, dubbed 'Firing Zone 918'. At the time, dozens of Palestinian families had been living in the area for years, since before Israel occupied the West Bank in 1967. They lived in 12 small villages and earned a living as farmers and shepherds.

In October and November 1999, the military expelled around 700 residents of these communities. Following the expulsion, the Association for Civil Rights in Israel (ACRI) and Attorney Shlomo Lecker filed a petition to the High Court of Justice (HCJ) on behalf of some 200 families. The court issued an interim injunction, in power to this day, that prohibited the state to expel the residents but also put their lives on hold. They continue to live in their homes and work their land, under constant threat of demolition, expulsion and dispossession.

Palestinian communities in the area are also barred from new development. Left with no choice, the communities built new homes without permits, as well as the necessary infrastructure, including for supplying water and power. The Israeli authorities issued demolition orders for these structures and in many cases carried them out, and confiscated infrastructure equipment, while many other demolition orders remain in power.

After 20-odd years of legal proceedings, the High Court is set to issue its ruling soon. In the last hearing on the matter, held on 10 August 2020, the state argued that the petitioners had not been permanent residents of the area when it was declared a “firing zone”, and therefore had no right to continue living in their homes. It further argued that the communities were taking advantage of the interim injunction: people not included in it were moving into the area and residents were building without permits. The state counsel claimed that Israel had been willing to offer a “compromise,” such as allowing residents to live in their homes for two months a year with prior coordination or on weekends and Jewish holidays when the military does not train in the area, but that the petitioners had rejected all the proposals – which would have effectively destroyed their lives and forced them to leave. Relying on this statement, the justices directed the petitioners to examine various solutions that would enable the military to train in their area of residence, maintaining that “the solution lies in one balance or another.” In doing so, the court ignored an Akevot Institute finding last August that declaring the area a firing zone had been intended from the outset to help drive the Palestinians out, and was never a military necessity.