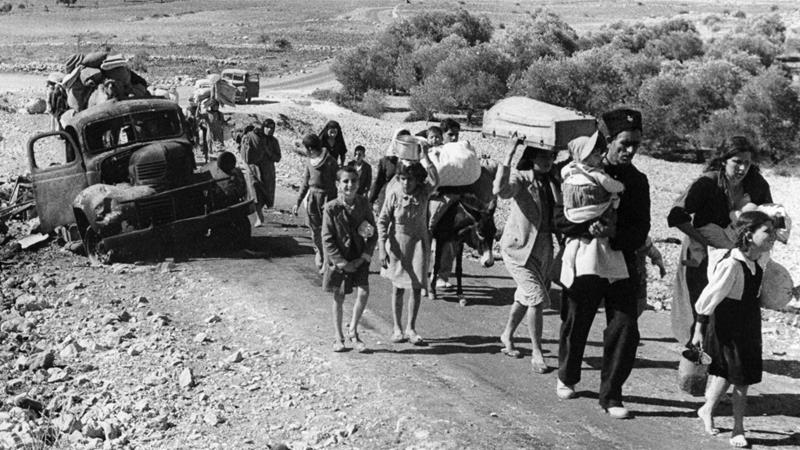 Palestinian refugees stream from Palestine on the road to Lebanon after they were forced out of their homes, November 4, 1948. (AP Photo/Jim Pringle)

The Palestinian Return Centre (PRC) has called on Britain to apologize to the Palestinians for the 1917 Balfour Declaration, which led to the displacement of thousands of Palestinians from their homeland.

In a statement issued on the occasion of the 103rd anniversary of the pledge, PRC said that it is time for Britain to act with responsibility and extend an apology over the notorious Balfour Declaration.

PRC also called on Britain to acknowledge the political rights of the Palestinian people, which have been denied for more than a century.

The Balfour Declaration, which resulted in a significant upheaval in the lives of Palestinians, was issued on November 2, 1917.

The Balfour Apology Campaign (BAC), kick-started by PRC some six years ago, falls exactly within the above context as it matches ongoing endeavors to hold Britain historically, morally, and politically accountable for the dispossession and displacement of 750,000 civilians from their own and only homeland—Palestine—to give way for the establishment of the self-proclaimed state of Israel.

In 2017, the UK government acknowledged its responsibility for the plight that has befallen Palestinian refugees as a consequence of the Balfour Declaration which resulted in the infringement of Palestinians’ inalienable rights.

This acknowledgement came after an e-petition headed up by PRC and launched on the official website of the British Parliament attracted nearly 14,000 signatures by British nationals in just a few weeks. Duty-bound to respond to the petition, after it managed to pass the benchmark for an official response, the never-sorry government responded 10 days later, only to confirm that it will not extend any apology over the Balfour pledge.

the Government’s statement accepted that the Declaration “should have called for the protection of political rights of the non-Jewish communities in Palestine, particularly their right to self-determination” but said that lasting peace must now be established through a two-state solution.

The response sparked universal condemnation, with activists and NGOs dubbing it as a sign of Britain’s failure to pay heed to the horrendous crimes committed by Zionist gangs who crept into Palestine during the British Mandate and embarked on systematic massacres and ethnic genocides that brought about the displacement of millions of Palestinians from over 570,000 Palestinian villages in 1948.

PRC is an independent, non-partisan, organisation committed to advocating for the rights of Palestinian refugees, in accordance with the historical, political and legal basis of the right to return. In July 2015, PRC was granted consultative status at the United Nations as a Non-governmental organization (NGO) in special consultative status with the Economic and Social Council (ECOSOC), in recognition of its efforts in standing up for Palestinian human rights.