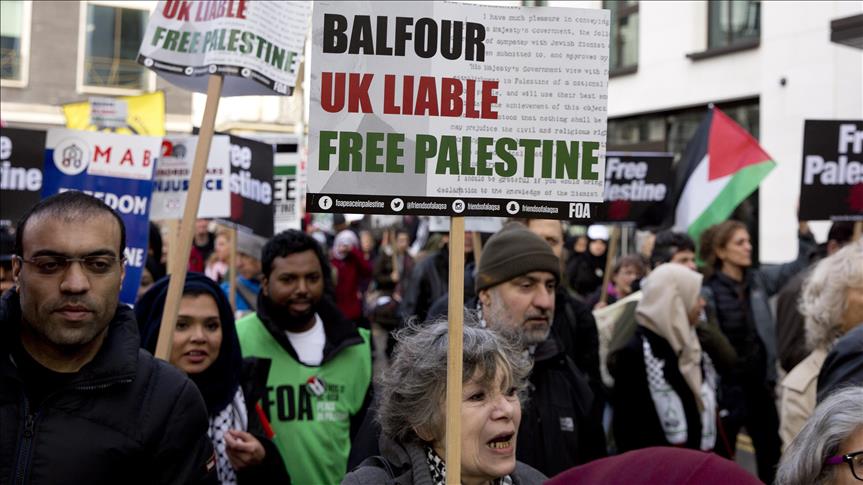 Pro-Palestinian supporters join national march through central London, England, on November 4, 2017 as they demand justice and equal rights for Palestinians coinciding with the centenary of the Balfour Declaration. ( Isabel Infantes - Anadolu Agency )

PLO Executive Committee member and Chairman of the PLO Department of Refugee Affairs Ahmad Abu Houli said that the Balfour Declaration “is illegal,” and “the [greatest] crime of this era,” leading to “the greatest historical injustice” against the Palestinian people.

Abu Houli referred to the devastating impact of the pledge on Palestinian refugees and called for the support of the international community and the end of the historical injustice.

“The Balfour Promise was tantamount to the West’s first step towards establishing an entity for the Jews on the land of Palestine, while acceding to the desires of global Zionism at the expense of a people that has been rooted in this land for thousands of years”, the PLO statement read.

Abu Houli also said that the Palestinian leadership will not allow the American ‘deal of the century’ (i.e., US President Donald Trump’s Middle East peace plan to be carried out, and that it will fight the decisions of annexation, Judaization, and settlement.

The PLO official confirmed that the Palestinian people will continue its legitimate struggle and popular resistance in all fields against the American deal of the century.

He emphasized that the Balfour Declaration is illegal and contradicts all the conventions, international treaties, and principles of human rights, and that what has happened as a result of it is illegal (i.e., the establishment of the State of Israel).

He demanded that Britain apologize before the Palestinian people for the Balfour Declaration, recognize the State of Palestine within the June 4, 1967 borders whose capital is Jerusalem, bear its responsibility towards the Palestinian people, and support its just cause. This is due to it being the main state responsible for its tragedy, and as compensation for its crime that is still showing its signs.