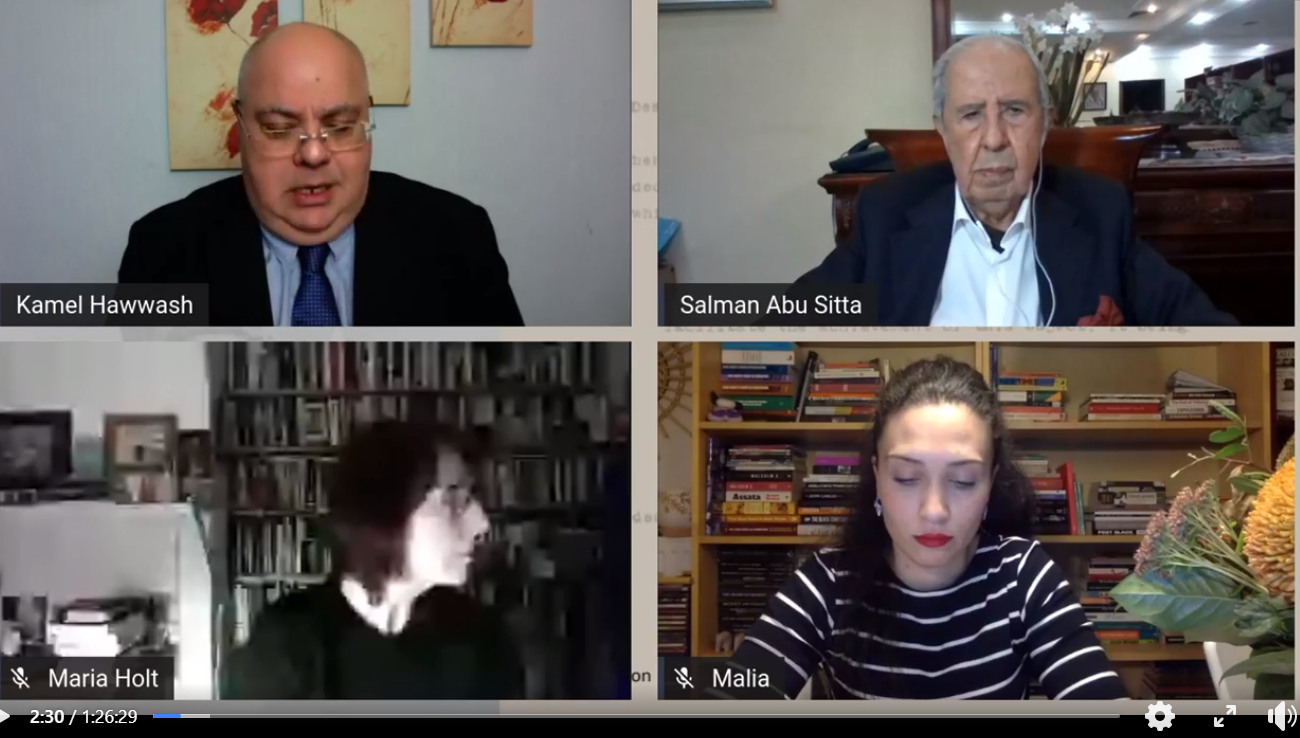 A webinar was hosted by the Palestinian Return Centre (PRC) on Monday 2nd November, 2020, from 7pm to 8:30pm, via Zoom video call to mark the 103rd anniversary of the Balfour Declaration.

Entitled “Britain & Palestine: Balfour to Boris”, the webinar underscored the tragic impact of the Balfour Declaration on Palestinian human rights for over a century, from 1917, when the notorious pledge saw the day, until the present moment.

The Webinar was chaired by Professor Kamel Hawwash, a British-Palestinian academic and writer. He is also the Chair of the Palestine Solidarity Campaign and a founding member of the British Palestinian Policy Council.

In his opening address, Mr. Hawwash introduced the Webinar’s first speaker, Dr Salman Abu Sitta, a Palestinian researcher most known for his ground-breaking mapping project on Palestine in the 21st, 20th and 19th centuries and for developing a practical plan for exercising the Palestinian right of return.

In his oral contribution, Dr. Abu Sitta focused on the history of the Balfour Declaration and the British colonial complicity in the ethnic cleansing, land theft and colonisation of Palestine, which had paved the way for the creation of Israel.

The second speaker was Dr. Maria Holt, a Senior Lecturer in the Department of Politics and International Relations at the University of Westminster. An outspoken political lobbyist and a parliamentary researcher specialising in the Middle East, Ms. Holt highlighted the devastating impact of the Balfour Declaration, saying the 103rd anniversary of the Declaration only serves as a stark reminder for the international community to speak up so loud for the

Palestinian refugees’ plight and for their inalienable right of return to their homeland.

The discussion was wrapped up by a thorough contribution by activist Malia Bouattia—the former president of the National Union of Students, co-founder of the Students not Suspects/Educators not Informants Network, and presenter/panelist of British Muslim TV's revolutionary talk show “Women Like Us”.

Ms. Bouattia’s speech covered the implication of the Balfour Declaration in terms of the geopolitical self-interests of colonial and imperialist powers back in 1917 up to the present decade.

“This is as much about freeing Palestine as it is about ending British and western imperialism”, stated Ms. Bouattia, as she unraveled her wish that the British government would assume its responsibility for the repercussions of the 1917 pledge, which she said was just one branch of Britain’s imperialistic tree.

The webinar culminated in a consensus that current British Government is historically, morally, and politically compelled to apologise for the Balfour Declaration and sever all diplomatic ties with Israel until the military occupation of Palestine is brought to a halt, international law is observed, and Palestinian refugees’ right of return materializes on the ground