As It Plans to Dispalce More Palestinians, Israel gives 2 Palestinian Homes to Settlers 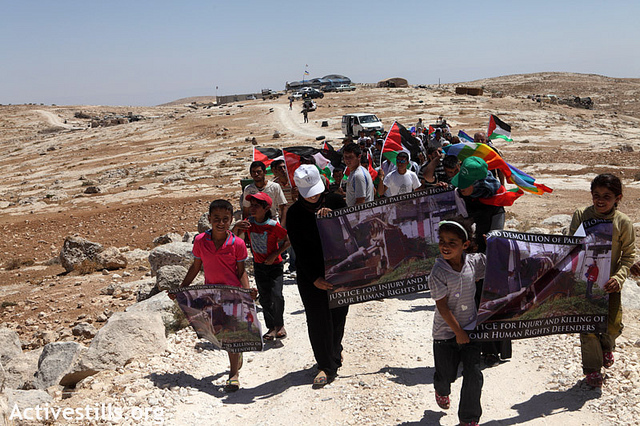 Palestinians, together with internationals and other Palestinian activists, protest Israel’s annexation plans and displacement policy. (File photo via Activestills.org)

The Palestinian Foreign Ministry condemned earlier this week transferring the ownership of two Palestinian homes in Silwan district in the outskirts of the old city of Jerusalem to Israeli settlers.

In a statement, the ministry said that the decision comes within the framework of the Israeli plan to deport and displace more than 700 Jerusalemites from their homes in Batn al-Hawa neighborhood to Silwan in occupied Jerusalem.

“We are looking at a very serious threat of Israeli violations in the Holy City [Jerusalem],” the statement reads.

“Israel is racing against time to implement the largest number of annexation and expansion projects before the end of the transitional period for the administration of the U.S. President Donald Trump,” the statement added.

The ministry also called on “international institutions to immediately intervene to oblige Israel to stop doing so and respect international law.”

Israel occupied East Jerusalem in 1967 and considers it along with West Jerusalem Israel’s capital.