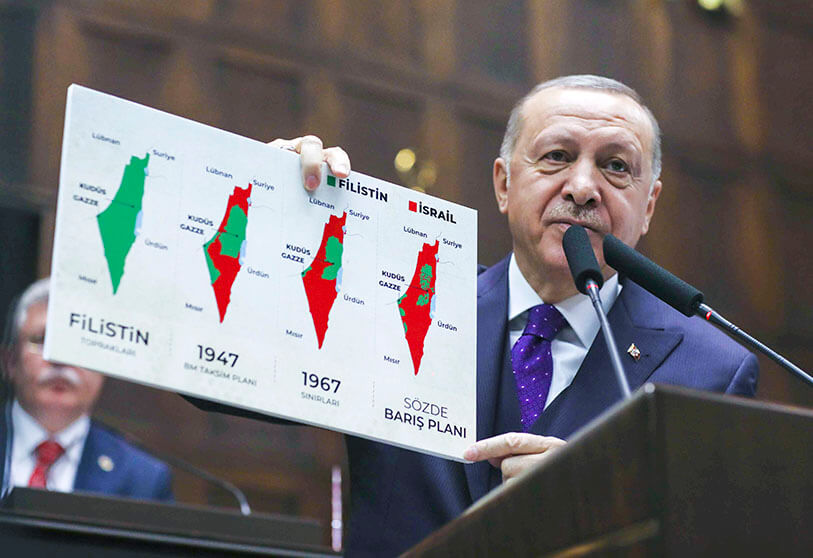 Turkey is doing all it can to raise the Palestinian cause at all platforms to end "occupation, oppression and genocide policies", President Recep Tayyip Erdogan said on Sunday.

According to Anadolu Agency, Erdogan's message was read out at the opening ceremony of a new building for the League of Parliamentarians for Al-Quds in Istanbul on the occasion of the International Day of Solidarity with Palestinian People.

"The League of Parliamentarians for Al-Quds has become the voice of the just cause of our Palestinian brothers and sisters globally through its efforts, meetings and conferences," he said.

He noted that Jerusalem is not just an issue that is close to the hearts of Muslims in Palestine, but also 1.8 billion Muslims around the world.

"On the basis of UN resolutions and the Arab Peace Initiative, we will continue our struggle with determination until an independent, contiguous and sovereign Palestinian state with East Jerusalem as its capital is established on the basis of 1967 borders," Erdogan added.

Turkish Parliament Speaker Mustafa Sentop speaking at the event said the Palestinian cause is dear not only to Palestinians, Arabs or the Islamic world but to anyone with a conscience, regardless of race, religion or political views.

The body works together with lawmakers from various world parliaments for consultation, coordination and cooperation on the issues of Palestine.

Palestinian territories, including the West Bank and East Jerusalem, have been under illegal Israeli occupation since 1967.

“Pursuing the Palestinian cause, in essence, means bringing post-WWII world order into question. We are in a period in which Muslims, and all other oppressed nations will grow stronger and fight on to gain their rights,” Sentop said.

He said the Al-Quds parliament, which consists of over 1,500 active or former parliamentarians from 73 countries, is the right platform to defend and promote the Palestinian cause.