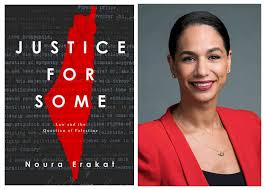 Noura Erakat is an assistant professor at Rutgers University. She has served as legal counsel to the U.S. House of Representatives and as a legal advocate for Palestinian refugee rights at the United Nations. (File photo via social media)

A prominent US-based academic and activist said Palestinian refugees’ struggle to return to their homeland is a reminder of the humanitarian universal, and legal struggle for the right to live freely and independently on one’s motherland.

Speaking as part of the “Return Week”, launched by PRC on December 7, assistant professor at Rutgers University, Noura Erekat opened her contribution by expressing her pride of being part of international efforts promoting Palestinian refugees’ right of return to their homeland.

Palestine lives in us “through a memory or a memory of our grandparents” which is “one of the things which defines us”, she said.

Erekat harked back to the British Mandate of Palestine and the Balfour Declaration of 1917, which sought to establish a Jewsih national home without regard for the native Palestinian population and their right to self-determination.

She said “one act of pen”, in reference to Balfour declaration, was tantamount to erasing the Palestinian population, which it referred to as “the non-jewish population”.

The prominent pro-Palestine activist discussed the “colonial erasure” enshrined in the British mandate and the Zionist project, which aimed to displace the Palestinians in order to establish a Jewish demographic majority of 80%.

“Coexistence was not possible in the Zionist vision”, she stated. “From the beginning, the Palestinians were removed intentionally under the pretext of defensive force”.

At the same time, Erekat said the plight of Palestinian refugees is not just humanitarian but is political at heart, as the refugees need not only food, clothing, and shelter, but also need to retrieve their human rights, including the right to establish an independent state and to exercise their personal freedoms guaranteed by international law and relevant UN resolutions.

The speaker underscored the battle waged against the UN Palestine Refugee Agency (UNRWA) and the defunding crisis faced by the Agency, which she said makes part of Israeli attempts to negate the status of Palestinian refugees.

“If UNRWA goes away, so would Palestinian refugees go away”, she stated.

“I want to emphasize that the return of refugees should mark the beginning of our liberation struggle and not the end of it”, she stated as she closed her speech. “We’re not alone. As we struggle for our ourselves, we are also  struggling for a future that is better for everyone”.

Noura Erakat is an assistant professor at Rutgers University. She has served as legal counsel to the U.S. House of Representatives and as a legal advocate for Palestinian refugee rights at the United Nations. She is a frequent commentator, with recent appearances on CBS News, CNN, and Fox News, among others, and her writings have been widely published in the national media and academic journals. Noura is the author of ‘Justice for Some: Law and the Question of Palestine’, winner of the 2019 Palestine Book Awards sponsored by the Middle East Monitor.

On Monday 7th December 2020, the Palestinian Return Centre (PRS) launched its long-awaited event “Return Week”, marking 72 years since the establishment of UN Resolution 194, which outlines the legality of the Palestinian right of return.