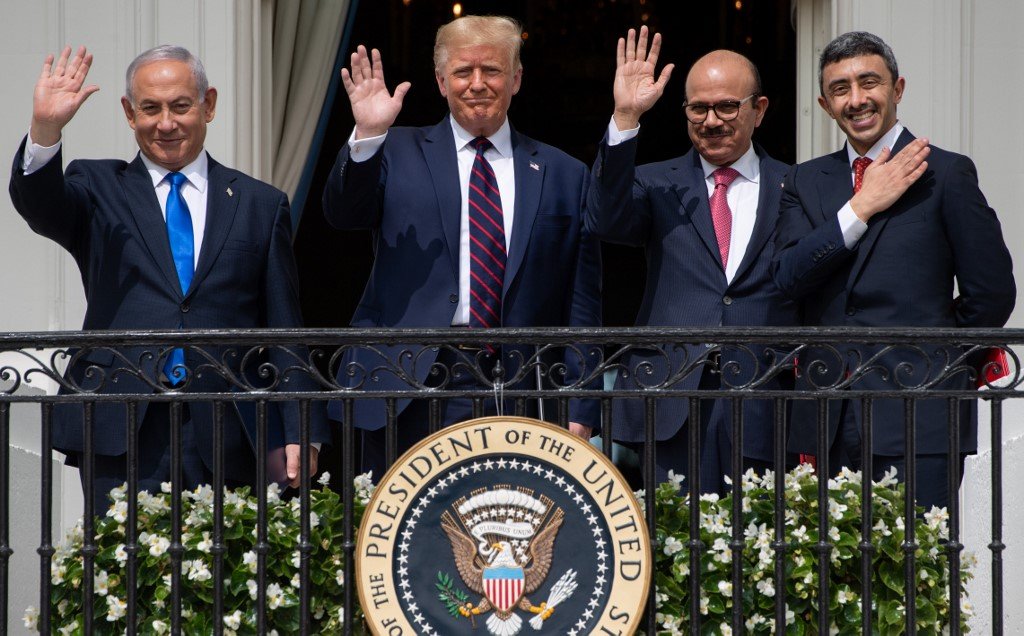 Israeli Prime Minister Benjamin Netanyahu, US President Donald Trump, and the foreign ministers of Bahrain and the UAE wave from the White House on 15 September (AFP)

A report that the United Arab Emirates is secretly colluding with Israel on a potential plan to eliminate the United Nations agency that cares for Palestinian refugees - a move that could prevent those refugees from ever returning home - should be taken seriously, warned British journalist Jonathan Cook.

In an opinion published on the Middle East Eye, Cook referred to a report by the French daily Le Monde which revealed that Israeli and Emirati officials have forged a “strategic axis” in which they are considering “a plan of action aimed at making UNRWA progressively disappear, without conditioning this on any resolution of the [Palestinian] refugee problem”. The UAE’s foreign minister did not respond to Le Monde’s request for comment on the matter.

UNRWA was created in late 1949 to support Palestinian refugees with jobs, essential food, healthcare and education in special displacement camps in the region. A year earlier, some 750,000 Palestinians had been ethnically cleansed from their homes - and dispersed across the region - to make way for the self-declared Jewish state of Israel.

Israeli Prime Minister Benjamin Netanyahu views the UN agency as a threat, proclaiming that a diplomatic resolution of the refugee issue might see them being returned to lands that are now in Israel. Netanyahu has argued that “UNRWA must disappear”, accusing it of perpetuating “the narrative of the so-called ‘right of return’ with the aim of eliminating the state of Israel”.

Having stymied any hope of negotiations, Israel has grown increasingly confident that it can secure widespread backing for dissolving the UN refugee agency, said Cook.

That would effectively strip more than five million Palestinian refugees languishing in dozens of camps across Lebanon, Syria, Jordan, the West Bank and Gaza of the right - enshrined in UN Resolution 194 - to return to their historic lands.

Israel also appears to have spurned compromises from the Palestinian leadership that would limit the refugees’ right to live only in a future Palestinian state established in what are now the occupied territories (rather than in all the territory from which Palestinians were expelled in 1948). In large part, it seems, that is because Israel has no intention of allowing such a state to be founded.

Winning the UAE - and the rest of the Gulf - over to the destruction of UNRWA, stranding most refugees permanently in a handful of the weakest, most volatile Arab states, would be crucial to Israel realising its Greater Israel plans, read the article.

According to the journalist, there is plenty of circumstantial evidence to support Le Monde’s report of UAE complicity. The assault on UNRWA’s future began in earnest in 2018 when the Trump administration made clear that it viewed the agency through the same strategic lens as Israel. Over the following months, the US ended all of its $360m annual funding to the UN body, depriving it of a third of its budget.

That was the moment, it seems, when the US stepped up efforts to recruit Arab states, especially those in the Gulf, to its so-called “deal of the century”. That “peace” plan was premised on Israel annexing swaths of the West Bank, making a viable Palestinian state impossible. In turn, it left refugees in no position to claim any kind of right of return, added the article.

Notably, this same period marked a dramatic shift in funding for UNRWA from the UAE and other Gulf states - just as the UN agency needed financial assistance more than ever before. The Emirates’ generous $52m aid for UNRWA in 2019 was slashed to a paltry $1m in 2020. Saudi Arabia cut its own funding by some $20m between 2018 and 2020, while Qatar reduced its contribution by more than $30m.

As a result, Philippe Lazzarini, UNRWA’s commissioner-general, warned in November that his agency was “on the edge of a cliff”, unable to cover its expenses for the first time in its history. In addition, its health and education services have been stretched to breaking point by the Covid-19 pandemic.

It is perhaps telling that the UAE’s foreign affairs minister, Anwar Gargash, did not respond to Le Monde concerning the allegations of Emirati collusion with Israel in undermining UNRWA.

But there are larger reasons to suspect that the UAE is plotting with Israel to extinguish UNRWA and the wider Palestinian national cause, wrote Cook.

It would be naive in the extreme to imagine that the UAE’s decision, along with Bahrain, to sign the so-called Abraham Accords back in September - normalising relations with Israel - was not viewed in entirely transactional terms. As with most agreements between states, the guiding principle is: "You scratch my back, and I’ll scratch yours." Both sides want to gain for themselves as much as they give away.

It is clear what the Emirates is gaining. Primarily, they will get access to arms and intelligence from the US and Israel that were long denied them under the doctrine of ensuring Israel’s regional “qualitative military edge”.

For aiding a treasured ally of the US, Emirati officials will receive an even more sympathetic hearing in Washington. Future US administrations will doubtless be even readier to turn a blind eye to the UAE’s human rights abuses, spinning its autocratic monarchies as beacons of Arab reform and progress.

As Middle East Eye has previously noted, the UAE will be helping to launder money, through the Abraham Fund, to pay for Israel’s architecture of oppression against Palestinians under occupation, including an upgrade of checkpoints.

And as refugees are a regional issue, the Gulf states are well positioned to help resolve the matter in Israel’s favour, ending any right of return.

As Le Monde’s report suggests, the backing of Gulf states will be critical to whether Israel succeeds in abolishing UNRWA and the rights of Palestinian refugees.

In Cook’s view, the only strength Palestinian refugees have is the UN agency that has preserved their rights for more than seven decades. Sweep it away, and the path will be clear to erasing the refugees from history.