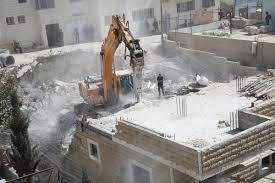 Israeli authorities distributed on Tuesday notices for the demolition of several structures and homes belonging to Palestinian families in the town of Jib to the northwest of occupied Jerusalem, according to local sources.

Activist Samer Abu Hamoud told WAFA news agency that Israeli forces raided several structures located near the separation barrier that runs through the town of Jib, including homes, storage rooms, and a wedding hall, where they photographed the structures before leaving behind the demolition notices.

At the same time, Israeli forces handed a Palestinian resident in al-Walaja town, southwest of the occupied West Bank district of Bethlehem, a notice to demolish his agricultural room.