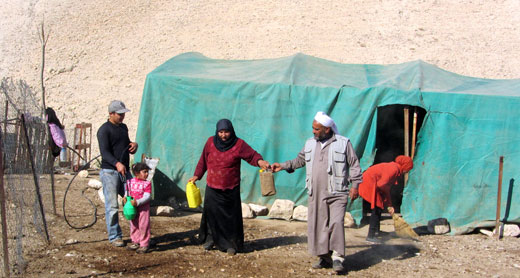 Israeli occupation authorities ordered on Thursday a number of Palestinian families in the Bedouin village of Ibziq, in the northern Jordan Valley region in the occupied West Bank, to leave their homes to make way for Israeli military training in the area.

Muataz Besharat, who monitors Israeli violations in the area, told WAFA news agency that Israeli army handed notices to a number of Bedouin families in the village ordering them to leave their homes for four days next week in order to make way for the training.

The Jordan Valley forms a third of the occupied West Bank, with 88 percent of its land classified as Area C, under full Israeli military and civil control.

Nearly 20 percent of the occupied West Bank has been declared by Israel "firing zones" since the 1970s, but according to the UN, some 80 percent of these areas are not in fact used for military training.

However, when military training takes place, Israel forces families to leave their homes for hours or days at a time until the drill is over.