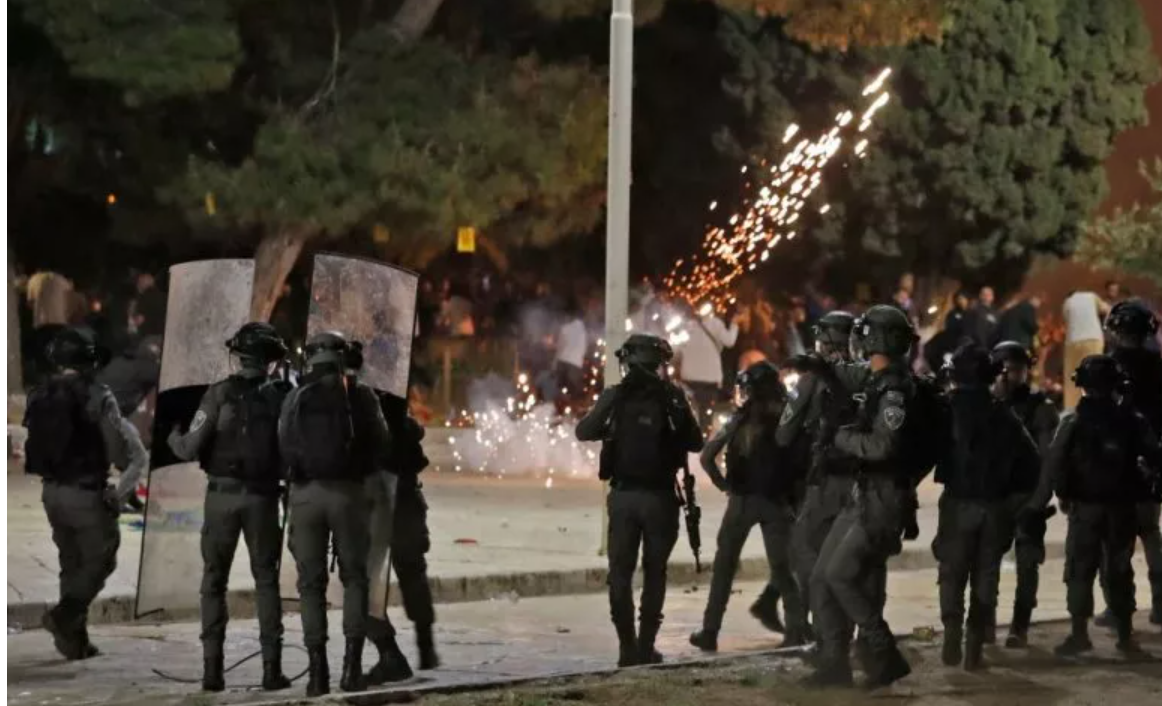 In this photo, flares spark amid clashes with Palestinian protesters at Al-Aqsa mosque compound in Jerusalem on May 7. (AHMAD GHARABLI/AFP VIA GETTY IMAGES)

Several prominent US lawmakers have spoken out against Israel over the potential evictions of several Palestinian families in Sheikh Jarrah neighborhood in occupied Jerusalem in favor of hardcore settler groups.

“The United States must speak out strongly against the violence by government-allied Israeli extremists in East Jerusalem and the West Bank, and make clear that the evictions of Palestinian families must not go forward,” Vermont Sen. Bernie Sanders wrote in a tweet.

"The forced removal of long-time Palestinian residents in Sheikh Jarrah is abhorrent and unacceptable. The Administration should make clear to the Israeli government that these evictions are illegal and must stop immediately," the progressive senator wrote.

Somali-American congresswoman Ilhan Omar also spoke out earlier this week against Israel’s actions. "We provide $3.8 billion in military aid to the Israeli government a year, without any accountability. As we speak, the Israeli military plans to force over 500 Palestinians from their homes. We must make sure that no US tax dollars are used to fund this violence," she said in a tweet earlier this week.

Democratic Representative Rashida Tlaib of Michigan shared her concerns as well, slamming the response from Israeli police and settlers. Tlaib was the first Palestinian-American woman elected to Congress back in 2018, while she and Omar were also the first two Muslim women elected to the lower chamber.

"There is no reason, none, to attack people while they are praying or seeking medical attention—other than to dehumanize and terrorize them," Tlaib tweeted on Saturday, sharing a video reportedly showing Israeli forces firing stun grenades into a medical facility.

African-American congresswoman Cori Bush also tweeted: "I know what it’s like to be brutalized for simply advocating for my own humanity. I stand in strong solidarity with our Palestinian siblings mobilizing to #SaveSheikhJarrah."

She also urged Secretary of State Antony Blinken to condemn the attacks against Palestinians.

Israeli police said that more than 200 Palestinians and 17 police officers were injured in clashes on Friday, after authorities cracked down while Palestinians worshippers gathered for prayers at Al-Aqsa mosque in East Jerusalem during Ramadan, the holiest month of the year for Muslims, Israeli newspaper Haaretz reported. Many of the worshippers stayed on after prayers to protest in support of Palestinians currently facing evictions at the hands of Israeli settlers.