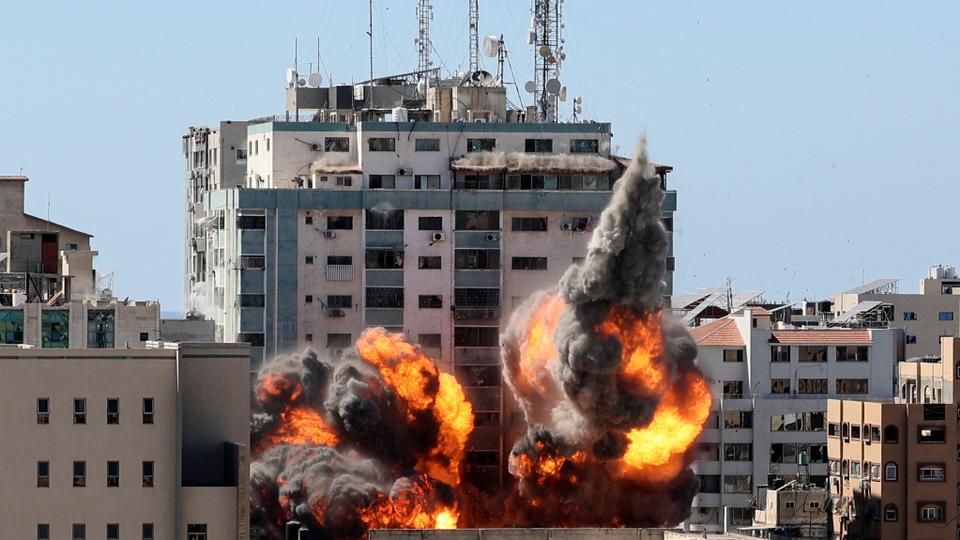 A ball of fire erupts from the Jala Tower as it is destroyed by Israeli military in Gaza city, on May 15, 2021. (AFP)

UNRWA has condemned the Israeli airstrike that targeted the Beach (Shati) refugee camp in the blockaded Gaza Strip, leaving scores of people dead.

On May 14, one family, the Abu Hatabs, lost 10 members, eight of them children. Five of the children attended United Nations Relief and Works Agency for Palestine Refugees in the Near East (UNRWA) schools, bringing the total number of UNRWA school children confirmed to have been killed since the escalation in hostilities began in Gaza to thirteen.

UNRWA condemned the killing of civilians, expressing shock by the level and scale of destruction.

Thousands of people are fleeing their homes to find shelter in UNRWA schools, amidst soaring cases of COVID-19, it said.

UNRWA called on the parties to exercise maximum restraint and comply with their obligations under International Law, including with regards to the use of force, at all times,” stat that “Utmost efforts must be made to prevent any further loss of life.”

UNRWA also called for thorough, independent, and transparent investigations in relation to these incidents to ensure accountability is delivered in strict accordance with international standards.

“UNRWA requests financial support to enable the Agency to run essential health, sanitation, and other critical services, in addition to implementing an evolving emergency response operation,” added the UN Agency is its press statement.