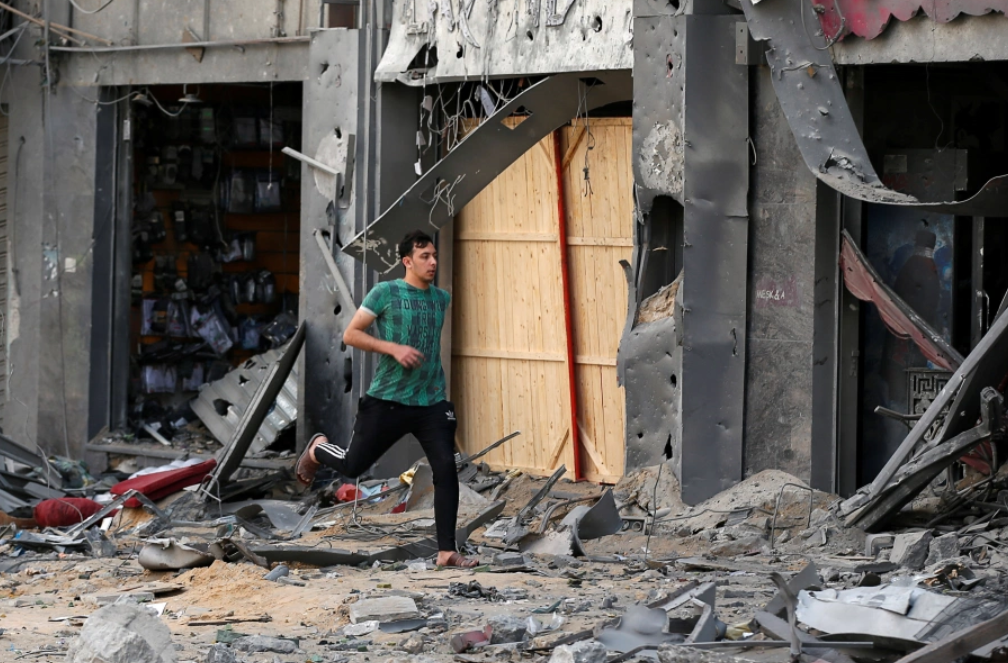 A Palestinian man runs for cover during an Israeli air attack near the site of a destroyed tower building in Gaza City. [Suhaib Salem/Reuters]

UN Secretary-General Antonio Guterres was "dismayed" yesterday by civilian casualties in Gaza caused by Israeli airstrikes, and also "deeply disturbed" by Israel's levelling to the ground of a tower containing international media outlets in Gaza, a spokesman said in a statement released Saturday.

Guterres spoke as Israel escalated its aggression on the Gaza Strip on Saturday dawn killing 10 members of an extended family in Shati refugee camp, and as the occupying state demolished a 13-floor Gaza building housing Qatar-based Al Jazeera Network and the Associated Press news agency.

"The Secretary-General is dismayed by the increasing number of civilian casualties, including the death of ten members of the same family, including children, as a result of an Israeli airstrike last night in the al-Shati camp in Gaza, purportedly aimed at a Hamas leader," his spokesman, Stephane Dujarric, said in the statement.

Guterres was "also deeply disturbed by the destruction by an Israeli airstrike today of a high-rise building in Gaza City that housed the offices of several international media organizations as well as residential apartments," added Dujarric.