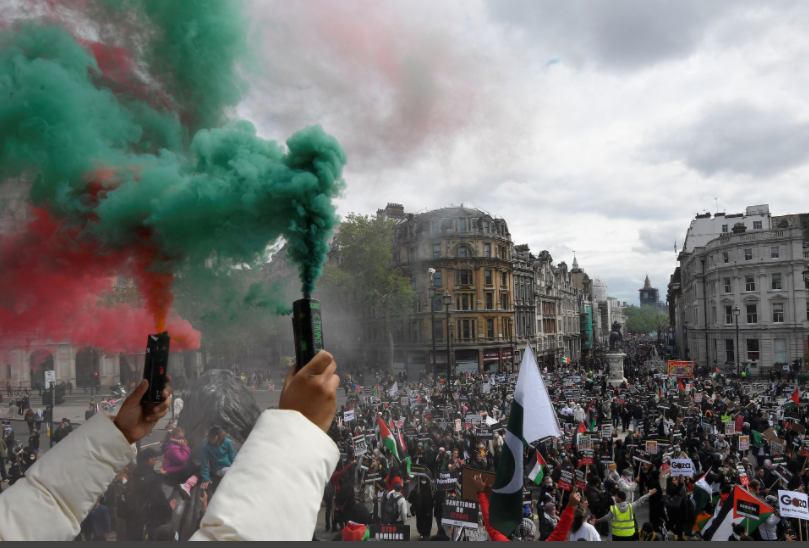 Several pro-Palestinian rallies have taken place in many countries around the world in support of the Palestinian people in the aftermath of the Israeli aggression on the blockaded Gaza Strip.

In Toronto, Canda, a large group of protesters marched through Yonge-Dundas Square, drumming and chanting in support of Palestinians in Gaza following 11 days of Israeli aggression.

The demonstration, organized by the Palestinian Youth Movement, began at 3 p.m. in Yonge-Dundas Square and moved northbound until it reached the Israeli consulate on Bloor Street.

In Australia, thousands of protesters have turned out at passionate pro-Palestinian rallies in Sydney and Melbourne calling on the Morrison government to hold Israel to account for ethnic cleansing and war crimes.

As many as 15,000 demonstrators are believed to have attended the two rallies.

In Bosnia and Herzegovina, several hundred protesters organized a support rally for the people of Palestine. The attendees carried Palestinian flags and messages of support in front of the City Hall.

The rally was attended by all generations, from children who came with their parents, holding photos of their dead and wounded peers from Palestine, to the elderly. They were also joined by Palestinian Ambassador to BiH Rezeqa Namooru.

In the United States, thousands of protesters rallied in multiple cities in support of Palestinian people in the aftermath of the Israeli aggression.

In Paris, France, a solidarity protest was held with thousands attending the march.

The capital marchers shouted slogans such as “Palestine will live, Palestine will win”, “Israel assassin, Macron accomplice”, “and We are all Palestinians.”

At the same time, thousands of pro-Palestinian demonstrators marched through London and other British cities on Saturday to protest against Israeli air strikes on the Gaza Strip.

Protesters called for sanctions on Israel during the march in London. Some were draped in Palestinian flags and set off green and red smoke flares. Others carried banners declaring "Free Palestine", "Stop bombing Gaza" and "Sanctions on Israel".

A ceasefire on Friday, mediated by Egypt, ended 11 days of hostilities, during which the Israeli military pounded Gaza with air strikes.

Gaza medical officials said 248 people were killed in the Palestinian enclave, and aid officials have expressed concern about the humanitarian situation there.