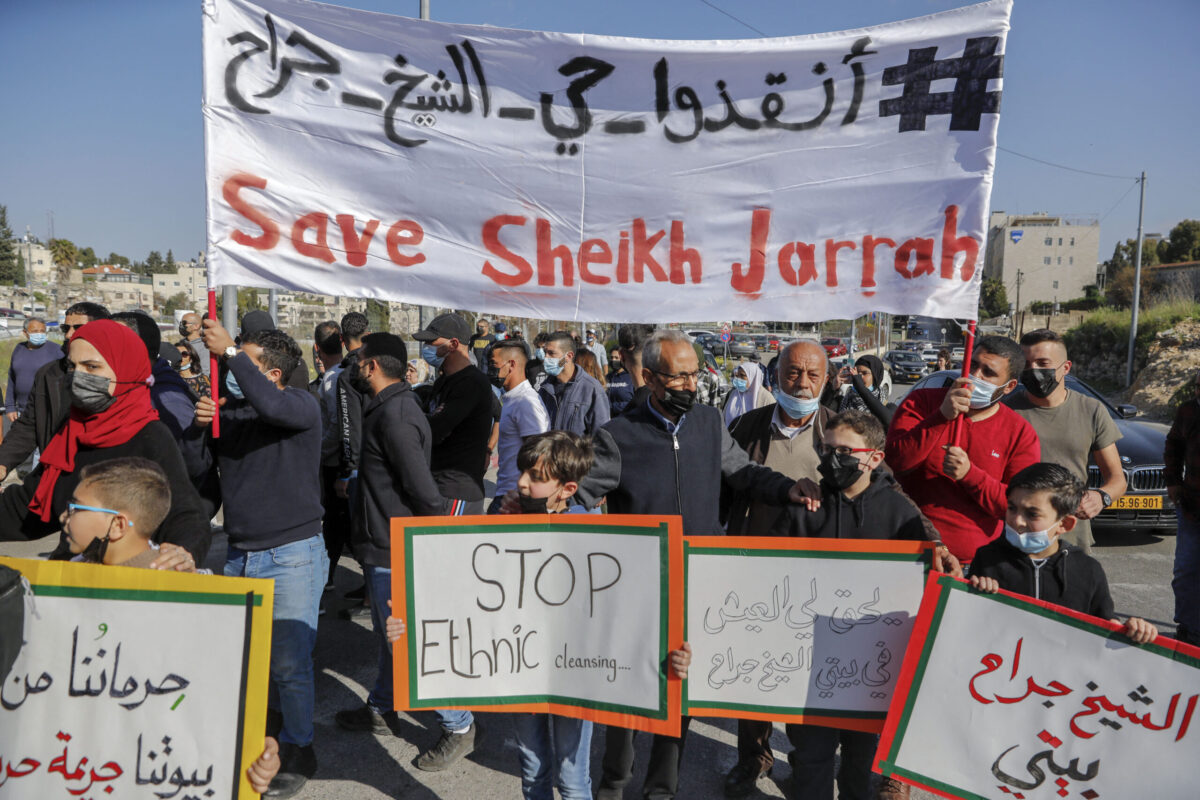 Activists lift banners and placards during a demonstration against Israeli occupation and settlement activity in the Palestinian Territories and east Jerusalem, in Jerusalem's Palestinian Sheikh Jarrah neighbourhood, on 19 March 2021 [AHMAD GHARABLI/AFP/G

Some 570 Dutch scholars and educators have so far signed an online petition calling on their government to cut all relations with Israel as a means to achieve just peace and end ethnic cleansing of Palestinians.

The scholars and educators, one of whom is Kylie Thomas who serves as an associate professor at the Netherlands Institute for War, Holocaust and Genocide Studies, expressed their solidarity with the Palestinian people worldwide and denunciation of the relentless Israeli colonial dispossession and occupation.

“We are scholars and educators in Dutch higher education and we stand against the ongoing dispossession, occupation and war that is being inflicted on Palestinians by the Israeli state. On Nakba Day, the 73rd anniversary of the forced expulsion of Palestinians from their homes in present day Israel, we stand in solidarity with all Palestinians. Our support goes out to Palestinians in Gaza, the West Bank, and Israel, as well as those 7 million refugees around the world, including those residing in the Netherlands, some of whom are our colleagues and students.”

The signatories used the term ‘conflict’ to refer to the situation in Palestine as “dangerous obfuscation”.

“The perception that this is a conflict between two equal sides is a dangerous obfuscation; it deflects from the reality that it is the Palestinians who live under military occupation, who are dispossessed of their homes, and who live as second class citizens in a system of segregation, described as apartheid by both Btselem and Human Rights Watch”, said the signatories. “It is this brutality and discrimination that is the cause of the escalation of violence that is currently taking place.”

They called for cutting all their country’s relations with Israel as a means to achieve a just peace as well as for the application of all United Nations resolutions on Palestine.

“We call on the Dutch government to ensure that justice is achieved for Palestinians and that they are granted their full rights. This is the only means by which both Israelis and Palestinians will live in peace. We call on the Dutch government to take action to achieve a just peace by cutting all economic, political, and military relations with Israel, until such a time as all sections of the Palestinian people are afforded their rights. We also ask for the application of numerous UN resolutions that serve this aim, including the right to self determination and the return of Palestinian refugees.”

The expressed support to Palestinian academics and students, hundreds of whom are placed in Israeli detention without trial or charge.

“We would like to extend our support and solidarity to Palestinian academics and students, whose freedoms and rights are continually violated. Over the last 10 years, more than 400 students have been arrested and detained by Israeli forces. Often these students are held in military detention without trial on the accusation of alleged membership of banned political groups. There are many reports of these detainees being subjected to forms of torture. Palestinian scholars have been subjected to harassment, and academics living abroad are banned from entering Israel.”

They expressed their adherence to boycotting Israeli academic institutions over the latter’s collaboration with the military.

“As a result of these violations we pledge to adhere to the call of our Palestinian colleagues to boycott Israeli academic institutions. This is justified on the basis of formal relationships between Israeli universities and the Israeli military, as well as other state institutions that form the architecture of the occupation. It should be made clear that this position has no effect on collaboration and cooperation with individual Israeli scholars and colleagues.”

They pointed that their support to the Palestinian rights is part of their broader support for decolonization.

“As scholars in the Netherlands, a former colonial power, we consider that our support for Palestinian rights is integral to the broader process of decolonisation. We advocate for equality for all people, an end to all racism, and an end to all colonial violence. This is a purpose that is integral to both our teaching and scholarship. On this basis we stand up for the Palestinian people and their right to self determination”, they maintained.