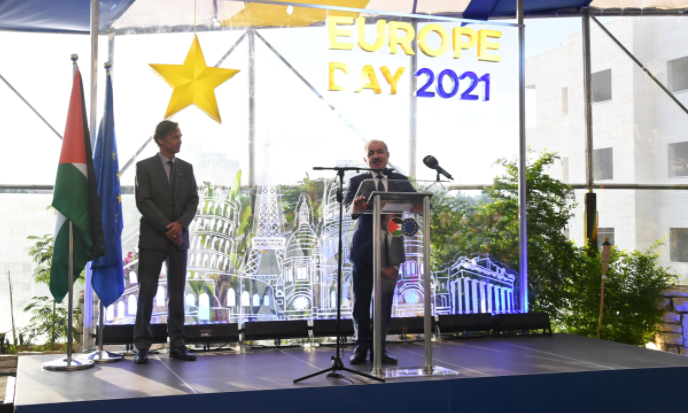 Speaking in a celebration of Europe Day in Ramallah last week, Shtayyeh commended Europe for its political support in terms of safeguarding international law, supporting the Palestinian people’s quest to secure their inalienable rights, including ending the Israeli occupation that began in 1967 and establishing their independent state.

The celebration was attended by EU Rep Sven Kühn von Burgsdorff in addition to a host of EU member states diplomats and Palestinian ministers and other officials.

Shtayyeh said that the Israeli occupation constitutes the longest occupation in modern history while pointing that on October 30, 2021, 30 years will have passed since the launching of the Madrid Peace Conference.

Therefore, he added, there was a need to launch a new international peace conference modeled on the Madrid Conference based on ending the Israeli occupation, achieving the two-state solution and respecting international law and the Palestinian people’s inalienable rights.

He stressed that Europe is a key player on the international political arena and is part of the Quartet, which requires it to take action to end any monopoly over the peace process, facilitate the transition from a unilateral to a multilateral approach of the peace process and fill the political vacuum by launching a European political initiative.

He pointed that the new Israeli government should grasp the opportunity to demonstrate its sincere willingness to make peace and end the occupation, but not to proceed with the unbridled colonial settlement construction, land grab, killings and demolitions.