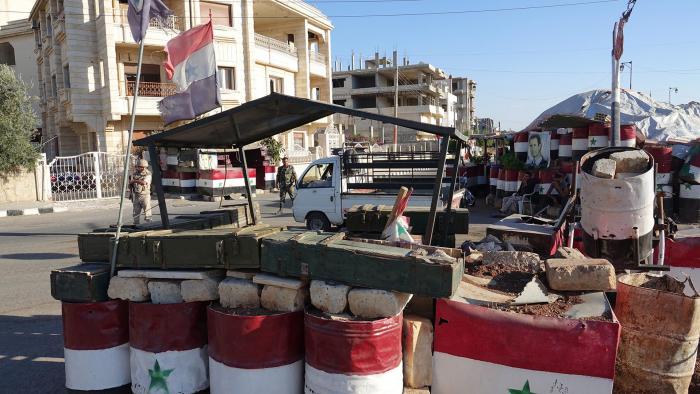 The Central Committee in Deraa city, south of Syria, has reached an agreement with the Syrian government to lift the noose tightened around the area.

As part of the deal, a number of residents and former opposition forces will lay down their personal weapons in return for a security solution, by the Syrian regime, in favor a 135 wanted residents.

Three military checkpoints will also be pitched in Deraa AlBalad on security grounds and arms will be rescinded from pro-regime committees in the area.

A few days earlier, the Syrian regime has attacked Deraa AlBalad, south of Syria, with anti-aircraft guns, forcing dozens of families, including Palestinian refugees, out of their homes and the nearby Deraa Camp.

Syrian regime troops have been deployed at checkpoints pitched around Deraa city, including around the city’s Palestinian refugee camp.

As a result, dozens of Palestinian refugee families sheltered in Deraa Camp have fled the area for fear of deadly escalations by the Syrian regime forces and their Russian allies.

Assad regime forces have been blockading the crowded neighborhood of Deraa AlBalad and Deraa Camp, in southern Syria for over a three weeks. As a result the humanitarian situation has taken a turn for the worse.

Civilians have had no access to healthcare facilities in the area and have run out of much-needed medicines, including cancer drugs. The life of pregnant women and patients in need of hemodialysis is particularly at risk. There is only one certified midwife in the area.