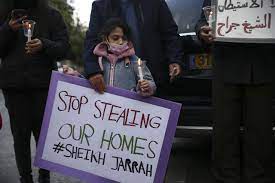 Church leaders in Jerusalem on Wednesday paid a solidarity visit to Palestinian families in Sheikh Jarrah neighborhood of occupied East Jerusalem facing eviction from their homes for the benefit of Israeli settlers ahead of a critical court hearing.

Latin Patriarch Pierbattista Pizzaballa and other ecumenical church leaders met with Sheikh Jarrah families who continue to struggle to stay at the homes they have been living in for decades.

The Israel Supreme Court is due to decide on Monday on an appeal by the families against their forced eviction from their homes as called for by Israeli settler groups seeking to take over their homes and dwell them with Jewish settlers.

After family members detailed to the church leaders the complex contours of this long-running battle, Archbishop Pierbattista offered words of encouragement to the families, as well as a pledge of the churches' prayers and support in the face of these legal threats they are facing.

The families thanked the church leaders for their solidarity visit and support for their fight against their illegal displacement.

“Today, in the Sheikh Jarrah neighborhood, we had the honor of a visit by the Latin Patriarch Pierbattista Pizzaballa and a group of church leaders in Jerusalem to our neighborhood who confirmed their support for our fight against ethnic cleansing and systematic forced displacement,” said the Sheikh Jarrah community representatives, in a statement quoted by WAFA news agency.