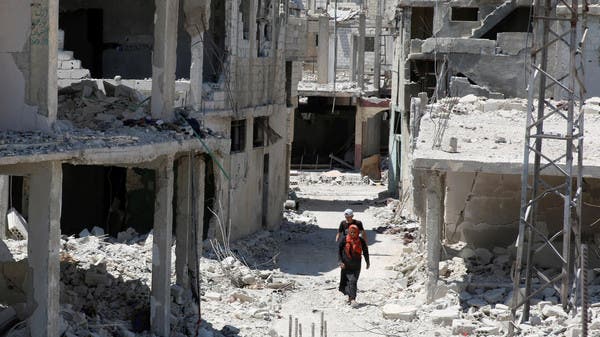 A man and woman walk inside a former Palestinian refugee camp in the southern city of Deraa, Syria June 18, 2017. (Reuters)

The United Nations Relief and Works Agency for Palestine Refugees in the Near East (UNRWA) expressed its deep concern over the damage sustained to its installations as a result of the ongoing armed conflict in southern Syria.

In a statement issued on Monday, August 30, Director of UNRWA Affairs in Syrian Arab Republic Amanya Michael-Ebye said that on the night of 27 August 2021, an explosion took place in the Tariq al-Sad neighbourhood of Dera'a city, close to Dera’a refugee camp and the UNRWA schools therein. The resulting shockwave led to damages to two UNRWA schools (Al-Safsaf and Ein Karem Schools). The damages include broken windows, doors and structural damage to a perimeter wall.

UNRWA had fully rehabilitated the school buildings in February 2020, after they were significantly damaged in the armed conflict in 2012 and, at the time of this explosion, had ongoing renovation works on the remaining school blocks in another section of the same compound.  The children in the area had not had a properly functioning school for eight years prior to February 2020.

The Agency's installations, like all United Nations facilities, are marked as such and fly a United Nations flag on the roof. The Agency received no warning that there would be hostilities in an area so close to the UNRWA schools, according to the UN official.

The Agency said it is extremely concerned by incidents of this nature, which threaten the Agency’s ability to maintain the safety of its personnel, beneficiaries and property, as well as the inviolability of UN premises pursuant to international law.

UNRWA reiterated its previous call that all parties must protect civilians and safeguard civilian infrastructure, including UNRWA installations in Dera’a Governorate.