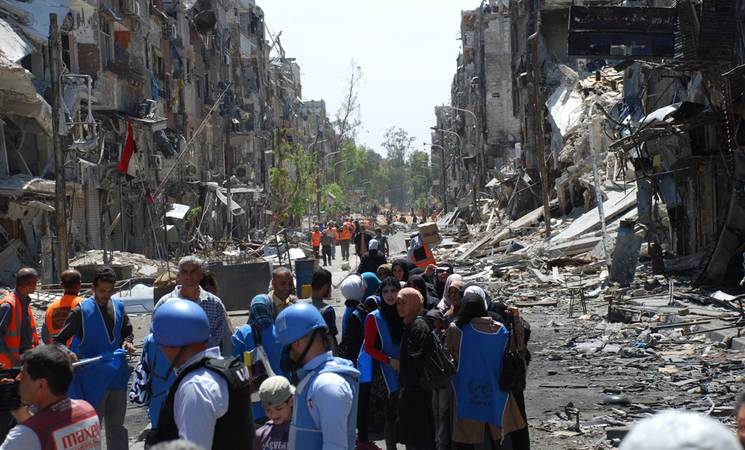 More than half a million Palestine refugees are affected directly by the conflict in Syria. (File photo via UNRWA)

The United Nations Relief and Works Agency for Palestine Refugees in the Near East (UNRWA) has expressed its deep concern over the physical and psychological impact of an explosion rocking a Palestinian refugee camp in Syria.

In an official statement issued on September 1st, UNRWA said that on the afternoon of 31 August 2021, seven Palestine refugee boys between the ages of 10 and 14 were playing in the heavily damaged Ein el Tal Camp in Aleppo, when a nearby explosive remnant of war (ERW) exploded.

Six boys were hit by shrapnel, injuring three of them lightly and three seriously. All of them are suffering from psychological trauma as a result of the tragic incident.

UNRWA Health and Relief and Social Services Staff, operating in Ein el Tal Camp at the time, were able to offer immediate first aid before the children were transferred to a hospital in Aleppo city for treatment. Four of them were discharged the same day, while the other three are still hospitalized. One 12-year-old remains in critical condition.

UNRWA said it is ‘’saddened and shocked by this tragic and violent incident involving Palestine refugee children and affecting families living in Ein el Tal camp, as well as those who might wish to return’’.

UNRWA, with a renewed sense of urgency, highlighted the danger of ERW on civilians and the urgent need of marking and clearance, removal or destruction of such ERW in areas where people are returning.