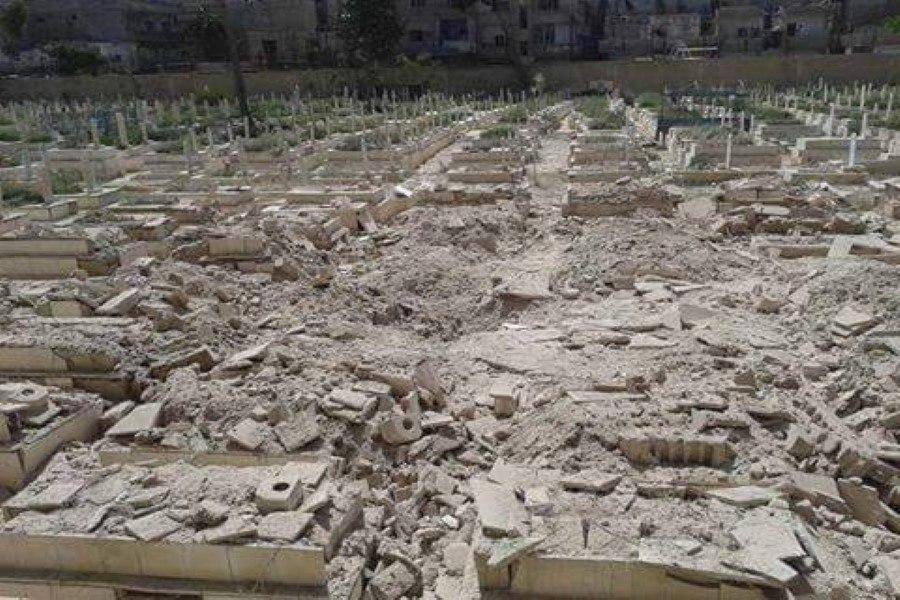 Heavy damage was wrought on Yarmouk’s AlShuhadaa Cemetery as graves were hit with barrel bombs and headstones smashed by missiles and mortar shells. (File photo via social media)

The Russian military and Syrian regime have finalized excavations in a cemetery at the Yarmouk Palestinian Refugee Camp in Damascus allegedly in search of the remains of Israeli soldiers who went missing during the First Lebanon War in 1982.

Russian troops began excavating the site on February 4, presumably searching for DNA samples from grave plots on the site suspected of belonging to Israeli soldiers who have been missing for nearly 40 years.

The missing soldiers are Tzvi Feldman and Yehuda Katz, who participated in the First Lebanon War and have been considered missing in action since 1982.

Feldman and Katz were members of late Zechariah Baumel's military unit and fought together in the Battle of Sultan Yacub between Israel and Syria in June 1982. The battle took place in Lebanon, near the Syrian border.

Over recent years, activists have slammed the Russian and Syrian government forces for ransacking the old cemetery of Yarmouk Camp, in Damascus, in search of the body remains of the Israeli soldiers.

On April 19, 2018, a military operation launched by Syria’s government battalions and their Russian abettors led to the destruction of 60% of civilian buildings and premises in Yarmouk Camp. Dozens of civilians were killed and hundreds injured in the offensive.

Heavy damage was wrought on Yarmouk’s AlShuhadaa Cemetery as graves were hit with barrel bombs and headstones smashed by missiles and mortar shells.