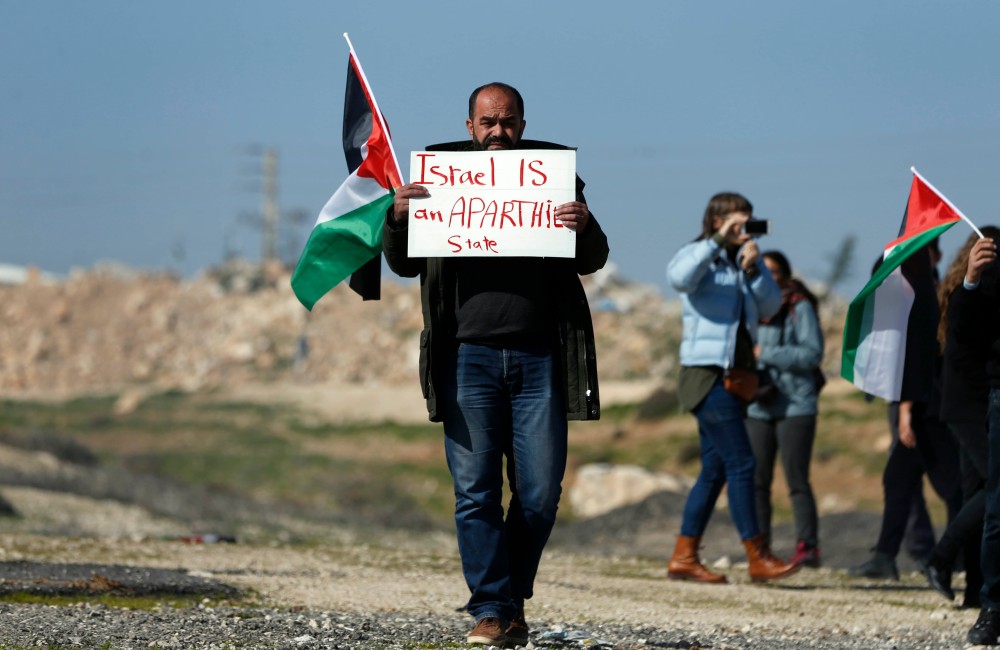 A protester carries a sign during a demonstration by Palestinian and foreign protesters against the newly opened Route 4370, in the West Bank, on Jan. 23, 2019. ABBAS MOMANI/AFP VIA GETTY IMAGES

The survey, which came as result of the a finding by the Middle East Scholar Barometer, a joint initiative from the University of Maryland Critical Issues Poll and the Project on Middle East Political Science at George Washington University, has said that 72% thought the Abraham Accords had a negative impact on the prospect of peace in the region.

Back in February, the group’s first round of findings were released. In that poll 59% of scholars described Israel as “one-state reality akin to apartheid”, and 52% said that a two-state solution was no longer possible.

The poll shows that academics have a very low opinion of the Abrahams Accords. 72% of those said the accords would negatively impact the prospect of Israeli-Palestinian peace and 70% said they’d have a negative impact on expanding human rights in the region.

The projects co-director Shibley Telhami (University of Maryland) and Marc Lynch (George Washington University) broke down the results in the Washington Post. They suggest that recent events in Palestine could have impacted the numbers, but they also point to the bombshell reports put out by B’Tselem and Human Rights Watch this year.

They wrote: “What explains such a significant increase in less than seven months? While it’s impossible to know for sure, two notable events intervened between the two surveys. First, the crisis in Israel following planned evictions of Palestinian families from their Jerusalem homes showed graphically the unequal treatment of Jews and Palestinians under Israeli control. The subsequent Gaza fighting between Israel and Hamas further focused global attention”.

They added: “Second, two human rights organizations — the Israeli-based B’Tselem and the U.S.-based Human Rights Watch — released widely read reports. The B’Tselem findings describe the reality in Israel and the Palestinian territories as apartheid, while the Human Rights Watch report argues that Israel’s behavior fits the legal definition of apartheid”.