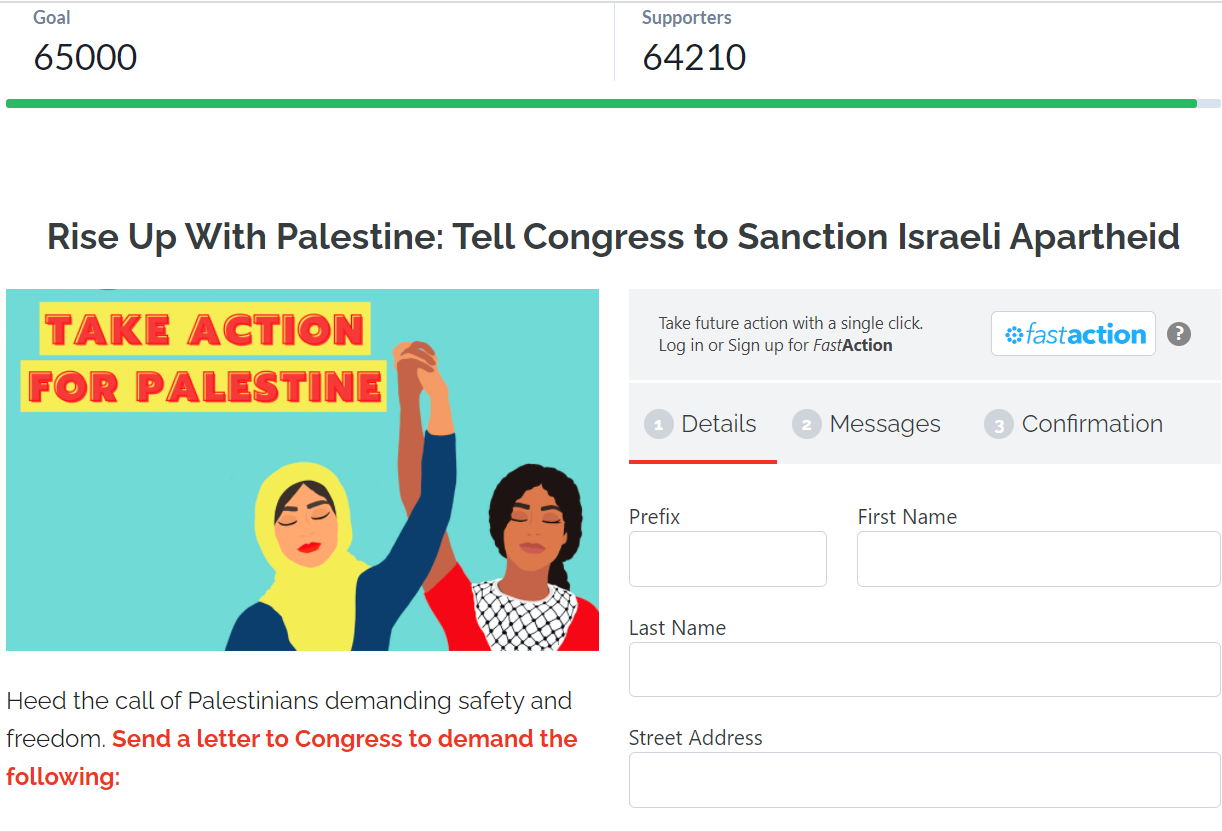 Petitioners demanded the US Congress to heed the call of Palestinians demanding safety and freedom and urge Israel to comply with international law and put an end to its apartheid regime.

The action calls for holding Israel Accountable, demanding that Congress support sanctions on Israel until it complies with international law and puts an end to its apartheid regime.

It further calls for an end to U.S. military funding to Israel, saying “the bombs are weapons Israel uses on Palestinians and are funded by our taxpayer money. Demand that your Congressional representative supports H.R. 2590, which calls an end to U.S. funding of Israel's oppression of Palestinians”.

Uplift Palestinian Calls for Freedom: Demand that Congress center those most harmed by violence and oppression the Palestinian people and support their right to resist Israel's ethnic cleansing. Answer their demands for freedom, justice, and safety.

This action, co-organized by members of the Invest in Justice Coalition, referred to Palestinians from Sheikh Jarrah, Jerusalem to Lydd to Gaza, who are rising up against Israel's continued ethnic cleansing and apartheid in Palestine.

“As Israel violently attacks Palestinians for resisting the oppression they have faced for 73 years, the cruelty of its settler-colonial regime is on full display for the world to from deadly bombs raining down on Gaza to tear gas, grenades, and raids on worshipers at the holy site of al-Aqsa Mosque. The time to take action is now”, it said.

“Each year, $3,800,000,000 of our tax dollars are invested in Israel's oppression of Palestinians. The U.S. provides Israel with unconditional diplomatic support and military funding, and Israel uses U.S. backing to act with impunity: stealing Palestinian land, entrenching its apartheid regime, and prolonging its blockade on Gaza”, they added.

“Our tax dollars are funding Israel's crimes against humanity while here at home we are told there is not enough money for Medicare for All, minimum wage, or public infrastructure all of which have a disproportionate impact on Black and Brown communities. We should have a say in how our tax dollars are used”.

“Our demand is simple: stop bankrolling ethnic cleansing and apartheid, and start investing in health and safety for all. Raise your voice by telling Congress to end military funding to Israel and sanction Israeli apartheid today”, they added.