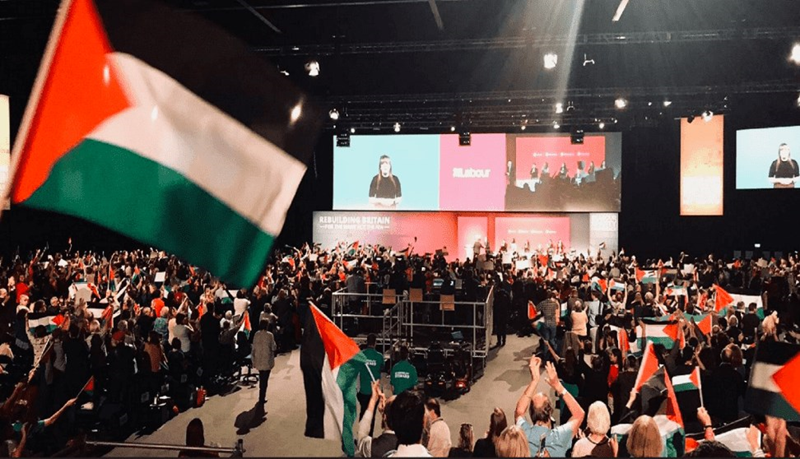 The UK Labour Party Conference voted in favour of a motion condemning Israel for committing the crime of apartheid. (Photo via social media)

The UK Labour Party Conference voted on Monday in favour of a motion condemning Israel for committing the crime of apartheid and causing an ongoing Nakba in Palestine.

The motion called for an end to the Israeli occupation of the West Bank, the blockade of Gaza, and the separation wall. It further demanded that Israel respect the right of the Palestinian people, as enshrined in international law, to return to their homes.

This is the first major political party in Europe to adopt such a position. The motion commits the Labour party to implementing sanctions including ceasing UK-Israel arms trade and trade with illegal Israeli settlements.

"Conference condemns the ongoing Nakba in Palestine, Israel's militarised violence attacking the Al Aqsa mosque, the forced displacements from Sheikh Jarrah and the deadly assault on Gaza," said the motion

The motion cited reports by Human Rights Watch and B'Tselem, which earlier in the year reached a landmark conclusion that Israel was practising the crime of apartheid as defined by the UN and systematically oppressing the Palestinian people.

"Conference resolves that action is needed now due to Israel's continuing illegal actions and that Labour should adhere to an ethical policy on all UK trade with Israel, including stopping any arms trade used to violate Palestinian human rights and trade with illegal Israeli settlements", said the motion.

The motion urged the Labour Party to "stand on the right side of history and abide by these resolutions in its policy, communications and political strategy".