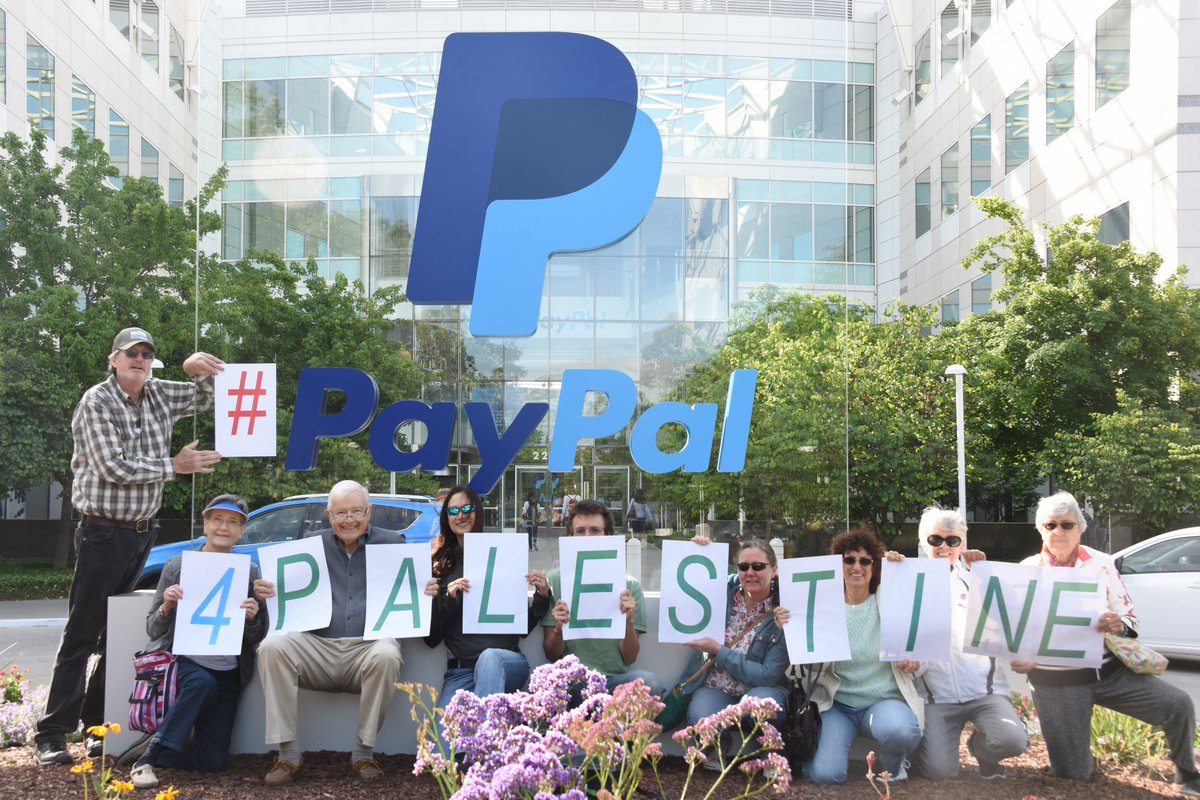 On May 16th, more than 60 community members gathered at PayPal headquarters in San Jose to call on the company to provide Palestinians with the same services that it offers to Israeli Jews living in illegal settlements. (File photo via menabytes)

Human rights organizations have signed a joint letter calling on the international payment platform PayPal to stop denying its services to Palestinians on discriminatory grounds in the Occupied Palestinian Territories including the West Bank and Gaza.

The letter demanded that PayPal revise its policies in line with international human rights law and engage directly with Palestinian CSOs to work together towards a sustainable solution.

Nadim Nashif, director of The Arab Centre for the Advancement of Social Media (7amleh), which defends Palestinian digital rights, said, "Our research has shown that the Palestinian market is ready for PayPal. By excluding Palestinians from its service but allowing illegal settlers, PayPal directly emboldens the Israeli occupation and further entrenches its devastating effects on the Palestinian population and their economy."

No services or payment operations are offered by PayPal to Palestinians in the West Bank or Gaza. However, Israelis living in settlements in the occupied West Bank, which are illegal by international law, benefit from services offered by the platform.

This is a reminder of the harsh restrictions on imports, exports and movement imposed on the Palestinians as a result of Israel's discriminatory laws and apartheid policies.

A new report by a Palestinian digital rights group, 7amleh, highlights PayPal’s failure to operate in Palestine and the repercussions for businesses, particularly on the Palestinian tech sector. The tech sector is one of the few industries that actually has the potential to grow under Israel’s occupation of Gaza and the West Bank. And there’s no substitute for what’s become a global standard for making online payments globally.

As commerce all around the world moves to online payment systems like PayPal, this shocking discrimination is crippling the Palestinian economy and forcing some to move out of Palestine just so to feed their family.

PayPal claims that its policy against Palestinians is based on its "prohibited countries" policy which labels Palestine and other countries as "high risk and conflict affected areas," in which PayPal has no ability to operate.

However, Palestine has already implemented the regulatory frameworks necessary for accessing electronic payment systems. This includes the "Electronic Transactions Law" which facilitates electronic transactions and establishes measures to combat money laundering and fraud.

The coalition, which includes Gaza Sky Geeks, Research at Momentum Labs and Human Rights Watch called on the international community to condemn PayPal's discriminatory policies and to join Palestinians in this campaign to pressure PayPal to extend its services to Palestinians in the occupied West Bank and Gaza Strip.