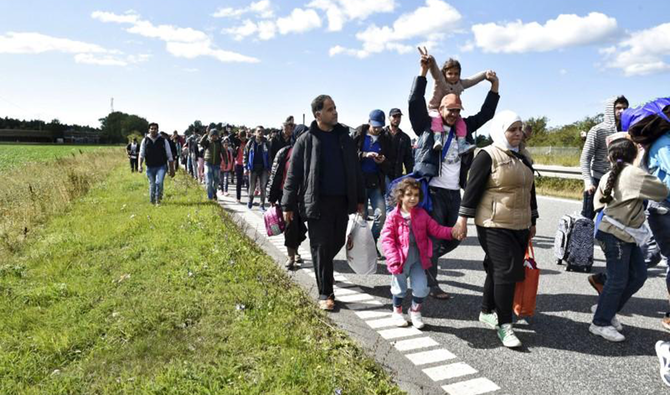 A large group of migrants, mainly from Syria, walk towards the north on a highway in Denmark. (Reuters/File)

An online petition which demands that Denmark should stop the Syrian repatriation policy that puts in danger the residency of a number of Syria refugees living in the country, got the required number of signatures to be submitted to Parliament, AFP reports.

According to the report, the petition, defending the rights of people who escape from the war-torn country, has been signed by more than 53,000 people. It needed 50,000 signatures for Parliament to consider it.

Tens of thousands of Palestinian refugees who have escaped Syria remain at the risk of repatriation from European and Arab Gulf countries.

Last year, Denmark passed a Bill to re-examine the cases of about 500 Syrians from the capital, Damascus, which is under the control of Bashar Assad's regime, saying that the current situation in Damascus is no longer such, as to justify a residence permit or the extension of a residence permit.

The Bill would allow Denmark to move refugees arriving on Danish soil to asylum centres in a partner country—potentially outside Europe—where the asylum-seekers would have their asylum cases reviewed and possibly obtain protection in that country.

The Danes are rejecting calls from non-government organisations (NGOs) and the United Nations to abandon the plans, which fear an erosion of refugees' rights.

Last month, the 24th report of the UN Syria Commission of Inquiry released on September 14 stressed that the country is not fit for safe and dignified returns of refugees and that the upsurge in fighting and the return to violence are cause for alarm.

“One decade in, the parties to the conflict continue to perpetrate war crimes and crimes against humanity and infringing the basic human rights of Syrians. The war on Syrian civilians continues, and it is difficult for them to find security or safe haven in this war-torn country,” the Chair of the Commission, Paulo Pinheiro told a press conference in Geneva.