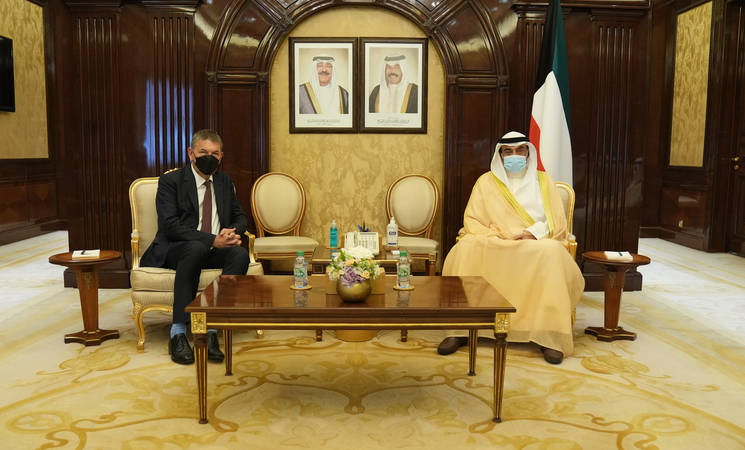 UNRWA said in a press released dating October 22 that The visit highlighted the strategic partnership between UNRWA and the State of Kuwait and the Kuwait Fund for Arab Economic Development.

Philippe Lazzarini held important meetings with prominent Kuwait officials, starting with His Highness, Prime Minister Sabah Al-Khaled Al-Hamad Al-Sabah at the Bayan Palace, Marzouq Ali Al-Ghanim, Speaker of the National Assembly and Sheikh Dr. Ahmed Nasser Al-Mohammed Al-Sabah, Minister of Foreign Affairs and Minister of State for Cabinet Affairs. He also met with Badr Al-Saad, Chief Executive Officer of the Board of Directors of the Arab Fund for Economic and Social Development, the Director General of the Kuwait Fund for Arab Economic Development, Marwan Abdullah Thunayan Al-Ghanem and Maha Al-Barjas, Secretary-General of the Kuwait Red Crescent Society attended the official luncheon hosted in his honor by the Kuwaiti Ministry of Foreign Affairs.

Throughout his meetings, the Commissioner-General emphasized that the support of the government and institutions of the State of Kuwait greatly contribute to the ability of UNRWA to maintain its vital services for Palestine refugees. Further, this timely, supplemental contribution provided by the State of Kuwait, through the Kuwait Fund for Arab Economic Development will allow the Agency to expand its emergency response to Palestine refugees in the region during the COVID-19 pandemic.

The Commissioner-General also referred to the historic role that Kuwait played in support of Palestinians, including through its hosting of Palestine refugees by the State of Kuwait. It is worth noting that through the Agency’s cutting-edge vocational training at the time, many Palestine refugees contributed to the development of Kuwait as teachers and skilled workers in the health sector.

The meetings also provided an opportunity for Lazzarini to discuss the humanitarian and operational context within which UNRWA operates across the Middle East.

During the visit, UNRWA concluded two agreements with the Kuwait Fund for Arab Economic Development (the Fund), whereby the Fund would provide US$ 1.5 million to UNRWA health services to Palestine refugees in Lebanon, and US$ 20 million to support the Agency’s General Programme Budget for 2021 and 2022. This financial support will help the Agency to continue providing vital humanitarian services to Palestine refugees in Lebanon, Syria, Jordan, Gaza, and the West Bank, including East Jerusalem.

The agreements were signed by the Director-General of the Kuwait Fund for Arab Economic Development, Marwan Abdullah Thunayan Al-Ghanem, and the UNRWA Commissioner-General, Philippe Lazzarini, during a ceremony that took place at the Fund's headquarters in Kuwait.

Kuwait has long been an important donor to UNRWA through its government and through several Kuwait-based organizations in the fields of development and relief, such as the Kuwait Fund, the Kuwait Red Crescent, the Zakat (Alms) House, the Patient Relief Fund Society, and the International Islamic Charitable Organization. Since its establishment, the contributions provided by Kuwait to the Agency have totaled nearly US$ 238 million, enabling UNRWA to continue to provide essential services to Palestine refugees across the Middle East.