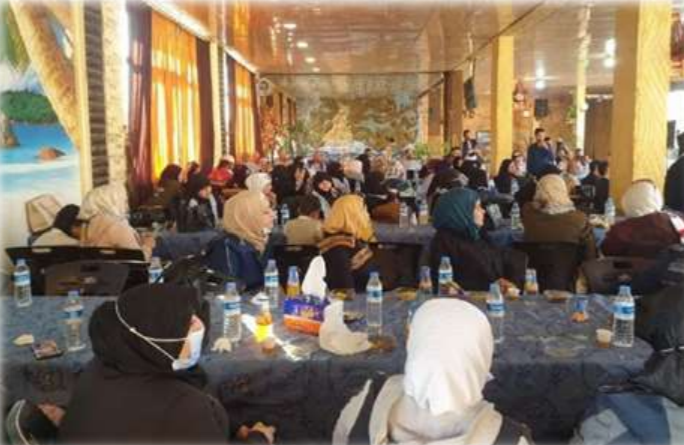 A ceremony was held in the northwestern Syrian city of I’zaz by the Association of Displaced Palestinians in Northern Syria, in cooperation with Maseer Foundation, to honor 31 Palestinian refugee women who survived torture in Syrian regime prisons.

Activists, CSOs, and prisoners’ relatives attended the event, which called for increasing efforts to pressurize the Syrian regime to disclose the condition and whereabouts of forcibly disappeared Palestinian refugees.

Data by the Action Group for Palestinians of Syria (AGPS) indicates that at least 110 Palestinian women and girls have been enduring mysterious fates in Syrian government prisons, where scores of others have died as a result of torture.

AGPS has frequently sounded the alarm over the violations perpetrated against Palestinian women in war-torn Syria, most notable among these are arrests, abductions, executions, body disfigurement, sniper attacks, sexual abuse, enforced deportation, and denial of the right to a fair trial, among other violations that flagrantly breach international laws and treaties.

Inherently a taboo misdemeanor in the MENA region, violence against women, be it sexual, physical, or verbal, has remained under-reported among the Palestinian refugee community in Syria, with reasons wavering between fear of retaliation, embarrassment, social prestige, fear of punishment for those below the age of criminal responsibility, and distrust in law enforcement.