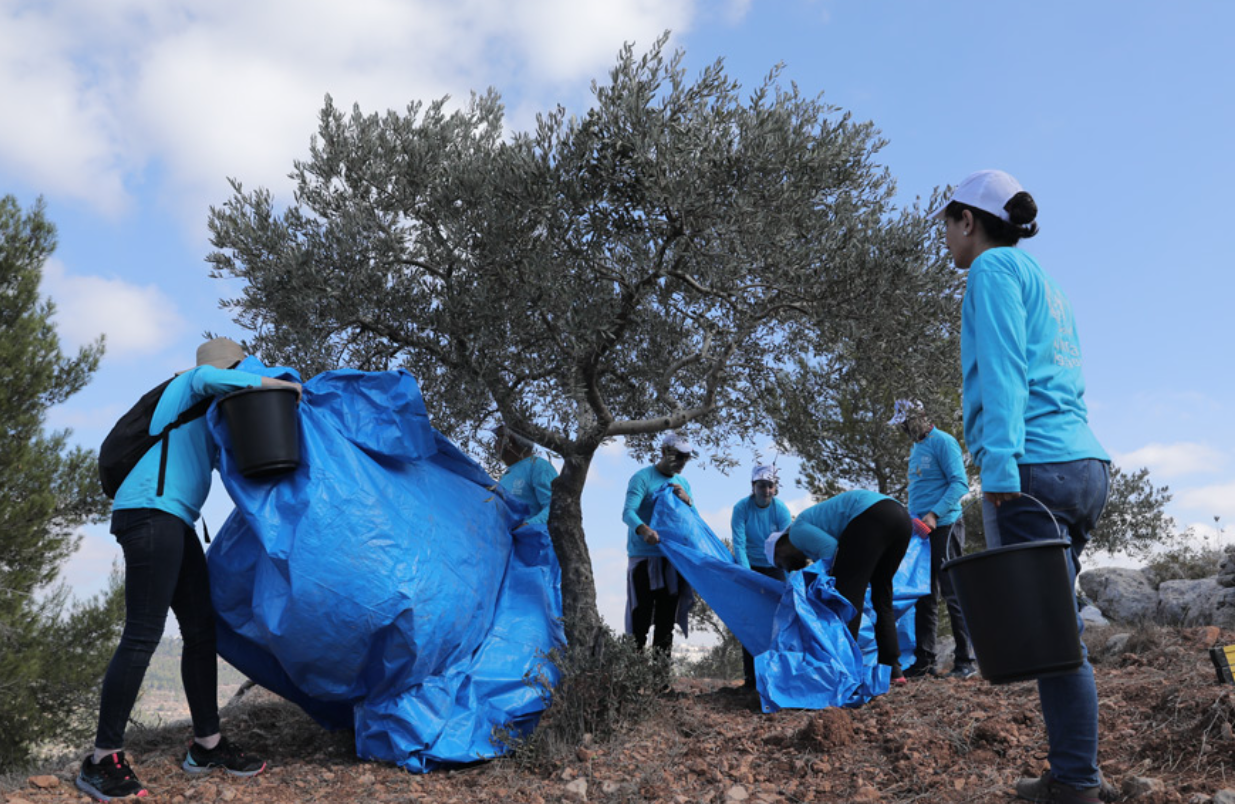 Marking the annual olive-harvesting season, the United Nations Relief and Works Agency in the Near East (UNRWA) West Bank Field Office organized an olive picking event in the West Bank town of al-Walaja. The village is located four kilometres northwest of Bethlehem and is home to some 2,600 registered Palestine refugees.

UNRWA said in a press release issued on Friday that the annual olive harvest season is a key economic, social and cultural event for Palestinians, and a festive moment for family and friends coming together. However, every year, farmers in the West Bank, including East Jerusalem, face threats of various kinds by Israeli settlers, including but not limited to physical assaults and intimidation, destruction, uprooting and vandalism of olive trees, theft of crops and harvesting tools.

In addition, the West Bank Barrier and the associated gate and permit regime are additional obstacles for Palestinian farmers facing access and movement restrictions that have severe consequences for the living conditions and livelihoods.

To mitigate the impact of some of these challenges, UNRWA, along with other humanitarian partners, have carried out activities to protect and support Palestine refugee farmers. This year UNRWA has dedicated a day to assist a refugee family with olive picking while at the same time providing olive harvesting tools and a protective presence to deter potential settler attacks.

This year, in addition to UNRWA staff members, students from the UNRWA Al Walaja School participated in the event. The Deputy Director of UNRWA Affairs in the West Bank, Kate O’Rourke highlighted the importance of the Agency’s engagement with and continuous support to Palestine refugees: “It is exceptionally important for us to have this activity, both to reaffirm our solidarity and commitment to protection for the Palestine refugee community in Al Walaja, and to participate in such an important part of Palestinian cultural heritage”.

Also speaking at the event, the Head of the Al Walaja village council, Khader Araj thanked UNRWA for the participation in picking olives and added, "UNRWA staff participated in picking olive trees on approximately thirty dunums of land that are currently under threat of confiscation. This participation is part of the many contributions made by UNRWA to the residents of Al Walaja village, over the past years, especially during the COVID-19 pandemic. Since 2012, UNRWA has implemented four Community-Driven Protection Projects in al-Walaja, including opening an agricultural road, rehabilitating a water spring, rehabilitating the UNRWA school located there, and providing support to farmers during the olive harvest season.”

Al Walaja is surrounded by the Israeli apartheid wall on three sides and neighbours the illegal Israeli settlement of Har Gilo. It is also adjacent to the Area B West Bank towns of Beit Jala and Bethlehem. The Barrier has disconnected Al Walaja from some 1,000 dunams of agricultural lands, now on the other side of the wall. In an advisory ruling, the International Court of Justice stated that the wall is in violation of Israel’s obligations under international law and called on Israel to cease its construction and dismantle build up sections.