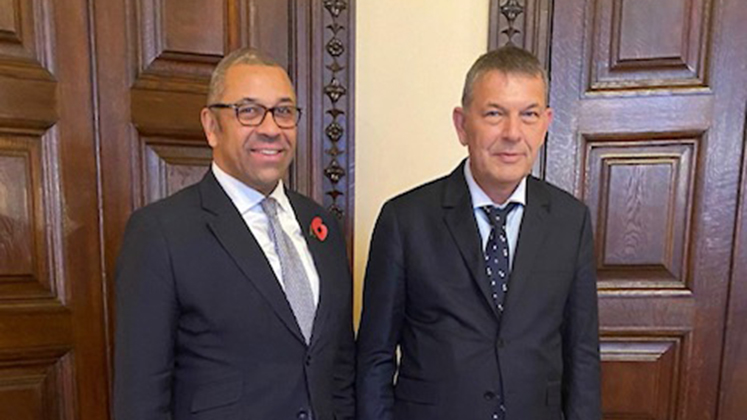 The Commissioner-General of the United Nations Relief and Works Agency for Palestine Refugees in the Near East (UNRWA), Philippe Lazzarini, concluded a high-level two-day visit to the United Kingdom (UK), his first since his appointment.

UNRWA said in a press in a press release issued on Monday that the purpose of the visit was to update British stakeholders on the Agency’s financial standing, at a time when UNRWA is facing one of its greatest political and financial challenges.

During the visit, Lazzarini met with Minister for Middle East and North Africa (MENA) at the Foreign, Commonwealth & Development Office (FCDO), James Cleverly and several Members of Parliament, including Flick Drummond; Shadow Minister of State for MENA, Wayne David; Leader of the Scottish National Party in the House of Commons, Ian Blackford; Liberal Democrats Spokesman in the House of Lords, Lord Purvis; and Chair of the Foreign Affairs Select Committee, Tom Tugendhat.

Lazzarini addressed members of the All-Party Parliamentary Group (APPG) on Palestine, and the APPG on the United Nations, which was chaired jointly by Julie Elliott and Lord Hannay. The UNRWA Commissioner-General also met with Ambassador Husam Zomlot, Head of the Palestinian Mission to the UK, as well as representatives from INGOs and civil society organizations.

Throughout his meetings, Lazzarini focused on the latest developments in the Middle East region and the stabilizing role that UNRWA plays amidst conflicts, crises and the pandemic and reiterated the urgent need to ensure that the Agency receives sustainable and predictable funding.

Lazzarini also emphasized the importance of continued strong UK support to UNRWA, amidst dramatic funding reductions. At the centre of many exchanges in London was Lazzarini’s confirmation that UNRWA attaches the highest importance to the principles and values of the United Nations, including neutrality and non-discrimination.

“As the year comes to an end, UNRWA faces a US$ 100 million shortfall. If the Agency is unable to collect funding soon, UNRWA services are at risk. Further, without additional funds we will be unable to complete November and December staff salaries. I call on our international partners, including the UK to help UNRWA end 2021 in a financially safe stable situation,” said Lazzarini.

The meetings also provided an opportunity for Lazzarini to discuss the humanitarian and operational context within which UNRWA operates across its five fields of operation.

The current mission came in the context of a dramatic decrease in the UK's Official Development Assistance (ODA) from 0.7 per cent to 0.5 per cent of GNI, which affects all humanitarian and development partners. Contributions to UNRWA this year have decreased 60 per cent compared with 2018 levels.

Historically, the UK has been a strong political and financial supporter of UNRWA and has consistently been amongst the top-five donors (3rd overall in 2020) providing predictable support through multiyear funding to the Agency’s core budget, as well as consistent support to the UNRWA Emergency Appeals.