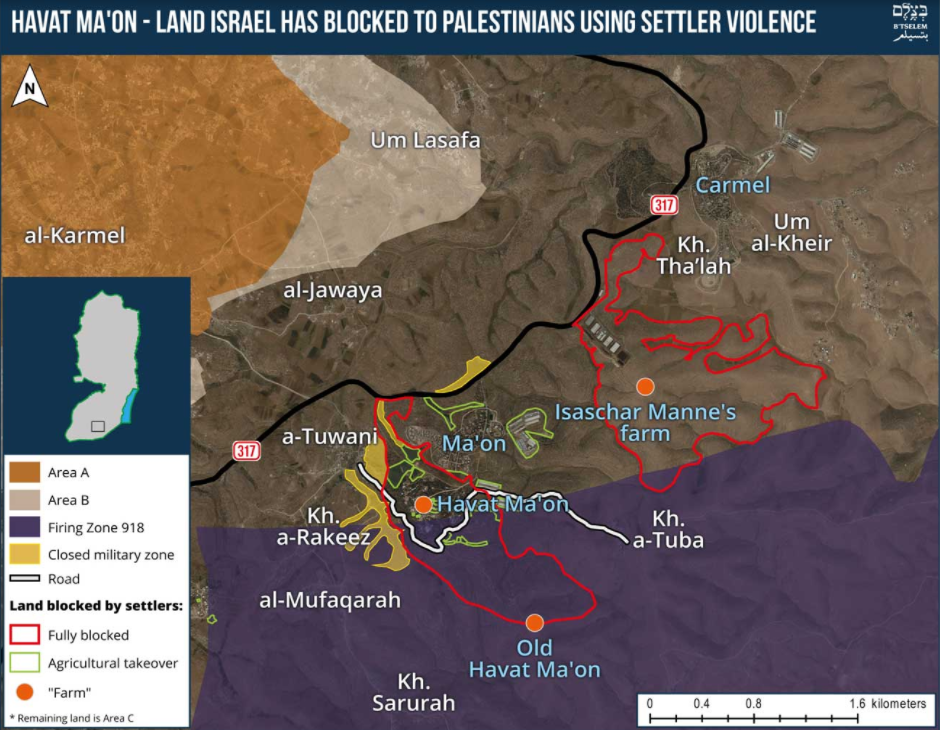 The report examines five areas: in the South Hebron Hills, settlers from the Ma'on and Manne farms seized 2,640 dunams; in nearby Khirbet Zanutah, settlers from three "farms" seized 5,050 dunams; near the settlement of Halamish, settlers seized 3,171 dunams; near the Havat Gilad outpost, settlers seized 2,576 dunams; and in the Jordan Valley, settlers from the Um Zuqa "farm" seized 14,979 dunams. In these areas, state-backed settler violence has denied Palestinians access to a total of 28,416 dunams – a land mass larger than the municipal jurisdiction of most Israeli cities.

For more than 30 years, B'Tselem has been documenting daily acts of settler violence against Palestinians. As the governing power in the West Bank, Israel could choose to prevent these acts. Instead, the state has harnessed settler violence to promote its policy of taking over Palestinian land for Jewish use. To that end, Israel has for many years backed, protected and financed settlers who violently disposses Palestinians of their land.

B’Tselem said Israel allows settlers to use the land from which Palestinians have been violently ejected and actively helps them by financing security, paving roads and hooking them up to the electricity and water grids. Various government authorities finance ventures for settlers. At the same time, the state gives settlers free rein to commit violent acts against Palestinians, and even assists them: The military does not confront the perpetrators or prevent their violence, and in some cases soldiers even take part. After the fact, the law enforcement system does not take measures against settlers who harm Palestinians.

The new report shows that settler violence is not a private initiative, but rather an unofficial branch of the state violence Israel uses to expel Palestinians from their land. Attributing the violence to young fundamentalists or to “rotten apples” while keeping up a pretense of law enforcement allows Israel the best of both worlds: maintain a comfortable space for “plausible deniability” and enjoy the outcome of the violence by taking over swaths of land in the West Bank.

According to the rights group, state violence – official and otherwise – is part and parcel of Israel's apartheid regime, which aims to create a Jewish-only space between the Jordan River and the Mediterranean Sea and treats land as a resource designed to solely serve the Jewish public. The apartheid regime is based on organized, systemic violence against Palestinians carried out by numerous agents: the government, the military, the Civil Administration, the Supreme Court, the Israel Police, the Israel Security Agency, the Israel Prison Service, the Israel Nature and Parks Authority and others. Settlers are yet another function on this list. Like the violence employed against Palestinians by the military and the bureaucracy, settler violence is organized, institutionalized, well-equipped and implemented in order to achieve a defined strategic goal.

The report illustrates how settler violence has complemented official methods by helping Israel take over farmland and pastureland that, for many decades, served Palestinian communities in five areas: shepherding communities in Masafer Yatta in the South Hebron Hills, in the southwestern Hebron Hills and in the Jordan Valley, and established villages west of Ramallah and west of Nablus. According to the report, the state has dispossessed these communities of thousands of dunams by using settler violence.

In some areas, this has been carried out explicitly by the military closing off swaths of land or requiring Palestinians to request advance permission to access their own land. In others, farmers and shepherds stay away for fear of encountering settlers who will assault them.

In testimonies given to B'Tselem field researchers, residents described how the violence and fear threatening the continued existence of their communities, driving them – for lack of choice – to abandon or scale back types of work they relied on for decades, forcing them stay away from pastureland and water sources that used to serve them, and limiting their cultivation of farmland.