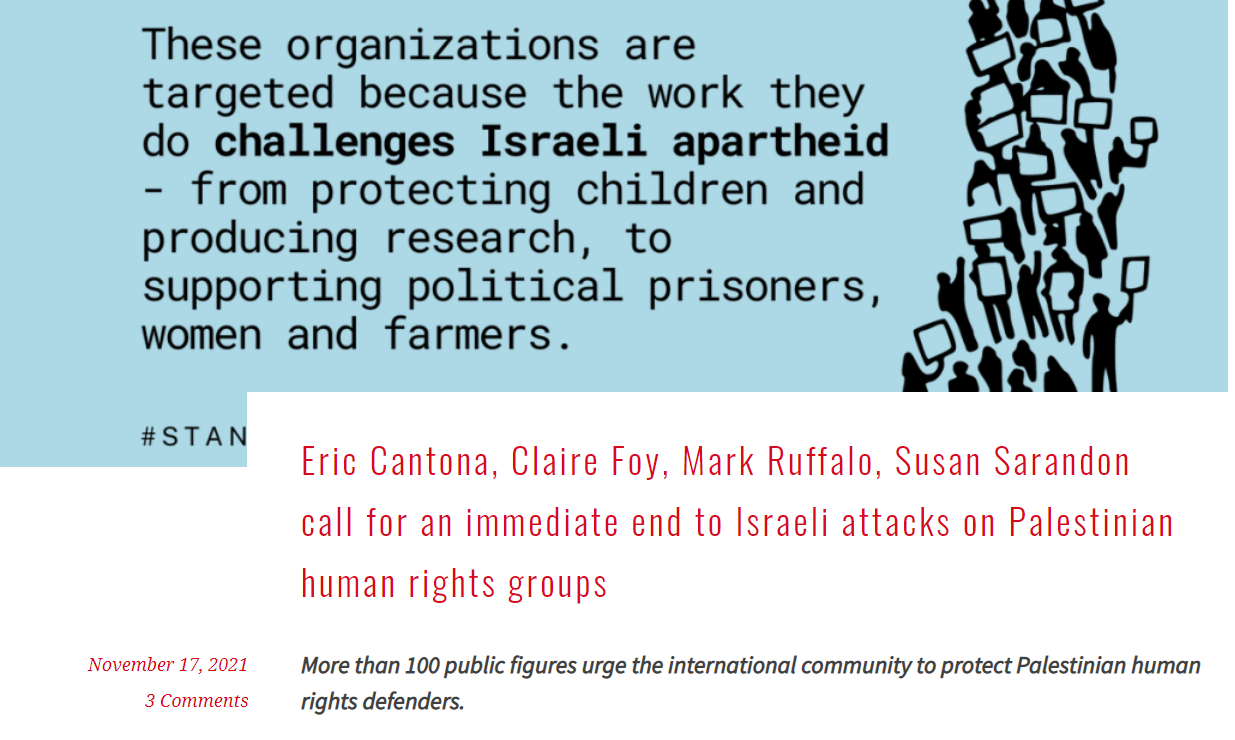 The statement warned that the Israeli military order that outlaws six “most eminent” Palestinian organizations in the occupied West Bank “puts at risk not just the organizations themselves, but the entire Palestinian civil society and the tens of thousands of Palestinians they serve everyday.”

The artists called on “all persons of conscience across the globe to stand with us. We call on the international community to #StandWithThe6 and protect Palestinian human rights defenders.”

Further to the joint statement, musician Peter Gabriel said: “Those brave enough and committed to guard our human rights, as these six organisations are, especially in difficult and dangerous situations, must be defended.”

Music producer Brian Eno commented on the situation: “This is beyond cruelty. It’s savagery, barbarism…”

Author and former Greek Minister of Finance Yanis Varoufakis urged for sanctions: “The decades-long failure of governments to hold Israel to account for its repression of the Palestinians has led to this situation. The international community must speak out and sanction Israel, now.”

Ken Loach cited a statement by Amnesty International and called for accountability: “Amnesty International and Human Rights Watch are right when they say that this is ‘an attack by Israel on the international human rights movement’. When will the Israeli government be held to account for its crimes? Political leaders cannot claim to support the rule of law and then do deals with Israel when its racist oppression of Palestinians is plain for all to see.”

Screenwriter Paul Laverty (I, Daniel Blake, Looking For Eric) said: “Once Governments start shutting down human rights organisations two simple questions ring in our ears… What are they hiding? What are they scared of? The answers are always revealing.”

Award-winning novelist Kamila Shamsie called on others to listen to Palestinian voices: “For many years now, Palestinian writers, thinkers, and human rights campaigners have been calling for meaningful solidarity from people around the world. The least we can do is listen, amplify their voices, and above all, refuse to be complicit with the system that so cruelly oppresses them.”

Over the past two weeks, Israel has launched an unprecedented and blanket attack on Palestinian human rights defenders beginning with the designation, on 19 October 2021, of six leading Palestinian human rights organizations as “terrorist” groups. The organizations include: Addameer Prisoner Support and Human Rights Association, Al-Haq Law in the Service of Man (Al-Haq), Bisan Center for Research and Development, Defense for Children International-Palestine (DCI-P), the Union of Agricultural Work Committees (UAWC), and the Union of Palestinian Women’s Committees (UPWC). Still, despite international condemnation by the UN, international human rights groups, and government officials, the Israeli occupation has doubled down in their crackdown and issued a military order that outlaws, entirely, the six Palestinian organizations in the West Bank.