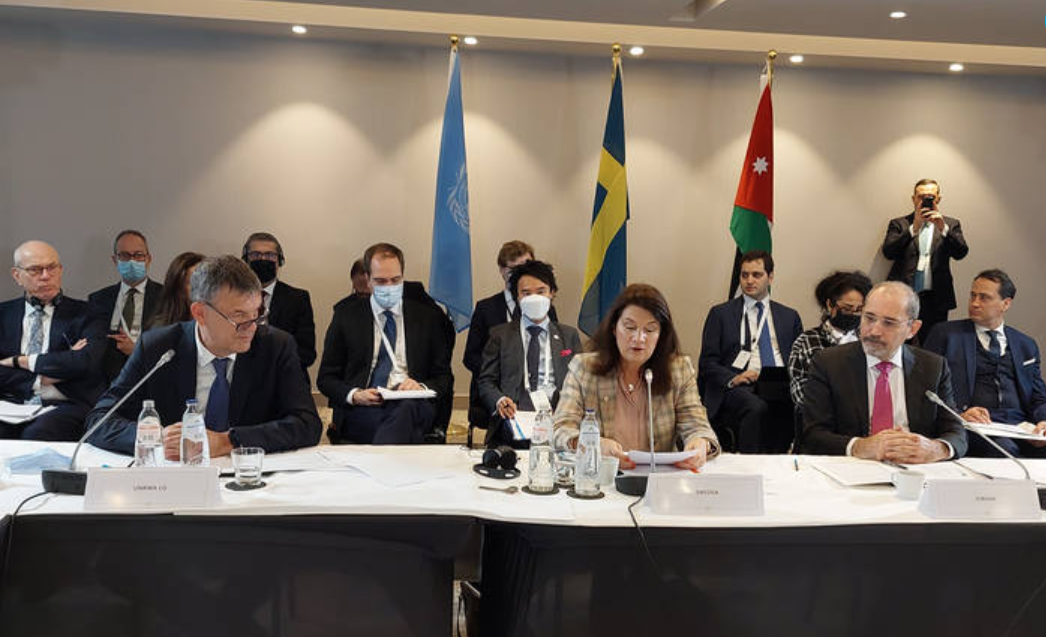 Dozens of nations came together on Tuesday to pledge political and financial support for the United Nations Relief and Works Agency for Palestine Refugees in the Near East (UNRWA) at an international ministerial conference.

The conference, titled “Sustaining the Rights and Human Development of Palestinian Refugees,” was hosted by the foreign ministers of Jordan and Sweden; officials participated both in-person and virtually.

“Today’s conference once again demonstrates the international community's recognition of the vital, life-saving role UNRWA plays throughout the Middle East,” said UNRWA Commissioner-General Philippe Lazzarini. “These commitments come at a vital time as the Agency faces increased political attacks that threaten our ability to provide humanitarian aid and human development services to millions of Palestine refugees. It is unacceptable that the well-being of these refugees continues to be threatened in the absence of a political, lasting solution to their plight. I commend today’s participants for their support of our shared efforts and urge all donor nations to quickly deliver on their financial promises.”

The gathering was co-chaired by Jordanian Foreign Minister Ayman Safadi and Swedish Foreign Minister Anne Linde who shared in a joint statement, “UNRWA continues to face repeated, catastrophic funding shortfalls that leave its staff and the millions of people it serves highly vulnerable to losing their basic necessities. We call on the international community to reform the structural funding model that has so often failed this vital UN Agency by committing to multi-year financing, expanding the donor base, and developing innovative financing mechanisms.”

UN Secretary-General António Guterres also spoke at this year’s conference. “We need to collectively find a path towards more predictable, sufficient and sustainable funding for the Agency, including through multi-year commitments. We need urgent and decisive support to maintain UNRWA’s ability to operate this year.  I also urge Member States to step up longer-term commitments and solidarity and match the generosity of the countries that host Palestine refugees”.

During the conference, UNRWA leadership discussed their plans for modernizing the Agency, as well as measures that will be adopted to maintain the commitment of UNRWA to UN humanitarian principles, with a focus on neutrality. But repeated funding cuts from donor nations and slow delivery on financial promises over the past few years have left the Agency on the brink of collapse, risking the health and educational services offered to Palestine refugees across all five of its geographic fields of operation.

UNRWA operates critical health, education, social protection and other services in the West Bank, including East Jerusalem, Gaza, Jordan, Syria and Lebanon at an annual budget of around US$ 800 million. Additional end-of-year contributions amounting to US$38 million leave UNRWA still in need of US$ 60 million for 2021.

At the conference, eight Member States announced a cumulative/total of over US$ 614 million in new or renewed multi-year agreements with durations from two to five years. The combination of these and existing multi-year pledges, if all fully realized at expected levels, would equate to 40 per cent of the Agency’s core budget needs for 2022.

UNRWA is a United Nations agency established by the General Assembly in 1949 and mandated to provide assistance and protection to Palestine refugees registered with UNRWA across its five fields of operation. Its mission is to help Palestine refugees in Jordan, Lebanon, Syria, West Bank, including East Jerusalem, and the Gaza Strip achieve their full human development potential, pending a just and lasting solution to their plight.