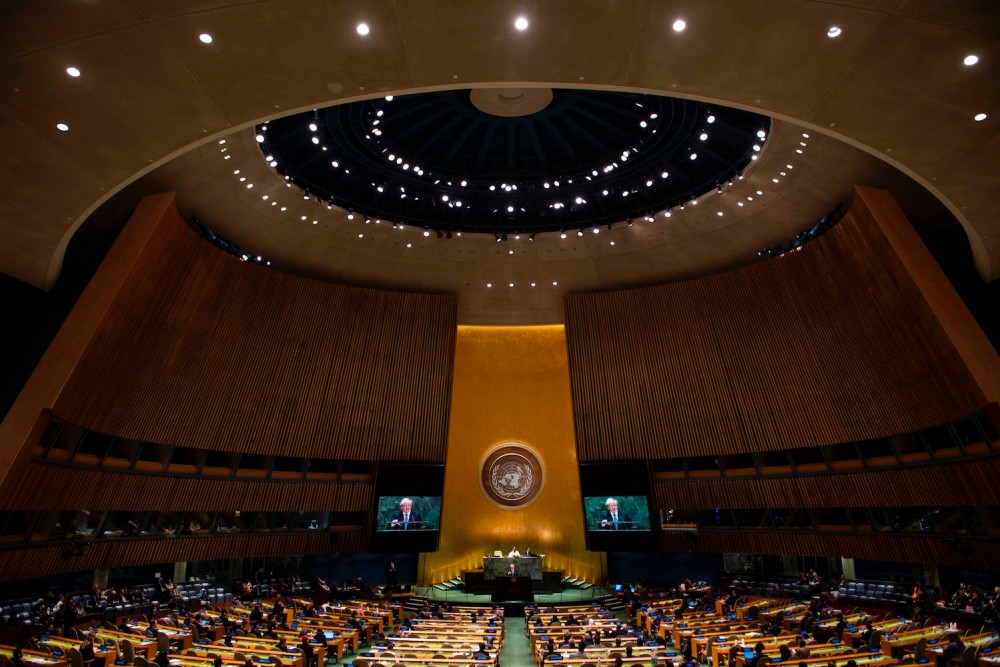 Some 157 UN member states voted on Thursday in favor of a resolution affirming Palestinian sovereignty over their natural resources across Israeli-occupied territories.

The General Assembly adopted the draft on "Permanent sovereignty of the Palestinian people in the Occupied Palestinian Territory, including East Jerusalem and of the Arab population in the occupied Syrian Golan over their natural resources".

The draft demanded "that Israel, the occupying Power, cease the exploitation, damage, cause of loss or depletion and endangerment of natural resources in the Occupied Palestinian Territory, including East Jerusalem, and in the occupied Syrian Golan."

Member States called on “Israel, the occupying Power, to halt all actions, including those by Israeli settlers, harming the environment, including the dumping of all kinds of waste materials, in the Occupied Palestinian Territory, including East Jerusalem, and in the occupied Syrian Golan, which gravely threaten their water and land resources, posing an environmental, sanitation and health threat to civilian populations."

Addressing that draft before the vote, the representative of Bolivia said his country supports the text, hoping the international community will soon cross the inevitable turning point and do justice for the oppressed.  Bolivia hopes the content of the Secretary-General’s upcoming report on the economic and social repercussions of Israeli occupation will let the Assembly take decisive action.  The action should enable, once and for all, the Palestinian people to exercise human rights and fundamental freedoms that have been denied to them for nearly 70 years.

Introducing the resolution, the representative of Guinea, speaking on behalf of the Group of 77, said Palestinians are continuing to suffer under Israeli occupation after more the half a century.  The draft reiterates the need to respect international law, expressing grave concern over Israel’s destruction of agricultural land, farms and greenhouse in Palestinian Territory.  It also points to an energy shortage in the Gaza Strip as well as scanty ground water, of which only 5 per cent remains potable.

The observer for the State of Palestine said approval of the draft represents the international community’s clear commitment to international law and rights of Palestinians and the people of the Syrian Golan over their natural resources.  It renews the call for Israel to cease exploiting land and water resources, destroying agricultural land and dumping waste material.

He said the international community must demand an end to Israeli occupation of Palestinian land, stressing that strong action is needed to bring Israel in line with its legal obligations and United Nations resolutions.

Taking the floor a second time, the observer for the State of Palestine referred to Israel’s statement about offering his country 1 million COVID‑19 vaccines, calling it mendacious, as the doses were expired and unusable.

The representative of Syria said the draft shows a commitment to the Palestinian and Golan people’s rights over their natural resources.  Israel has continued to exploit the human rights in the occupied Syrian Golan by confiscating water and renewable and non-renewable energy sources as well as building settlements on agricultural lands that belong to Syrians.  The international community must take concrete, decisive actions in compelling Israel to end its occupation.