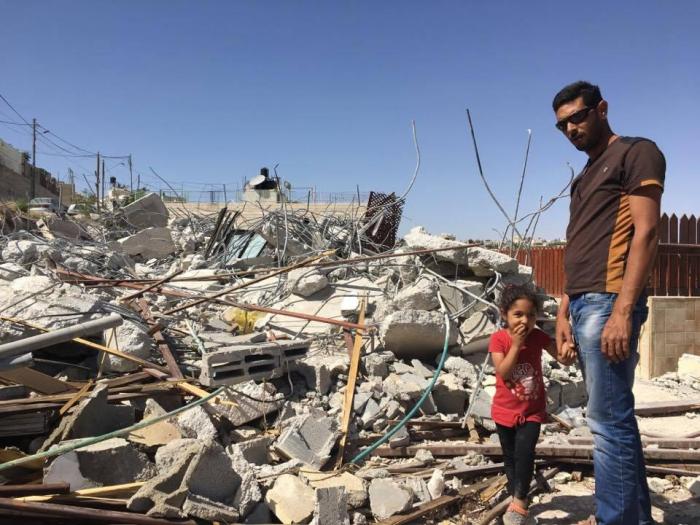 Palestinian citizen Ashraf Fawaqa and his daughter Saba, 4, stand next to the rubble of their East Jerusalem home after it was demolished by Israeli authorities on May 4, 2017. (File photo: HRW)

Minister of Jerusalem Affairs, Fadi Hidmi, on Tuesday called on ambassadors and representatives of Western countries to rapidly intervene in response to the dangerous Israeli escalation abd demolition of Palestinian homes in occupied East Jerusalem.

This came in an urgent message to the ambassadors, consuls-general and representatives of Western countries to Palestine.

"I am writing to draw your attention to the dangerous escalation of house demolition decisions in parallel with the noticeable increase in the number of demolished houses since the beginning of this year," Hidmi said.

The Palestinian official said the Israeli District Court authorized the demolition of dozens of homes in the Wadi Yasoul and al-Bashir areas in Silwan neighborhood, which threatens to displace hundreds of Palestinian citizens, a large part of them are children.

The minister said that the decision came after a Palestinian family was handed over a decision to demolish a residential building in Wadi Hilweh area in Silwan that includes four apartments and also contains a health clinic.

"In the neighborhood of al-Tur, 10 families face the threat of displacement after the decision of the occupation municipality to demolish their five-story building," he pointed out.

Hidmi indicated that hundreds of other Palestinian-owned homes are at risk of demolition in the al-Bustan area of Silwan and other neighborhoods in the city.

"Since the beginning of this year, more than 139 buildings have been demolished in the city, and the demolition decisions are increasing significantly, while not a week passes without revealing new settlement projects on the occupied city," the minister said.

He added that the danger of the decisions to evict Palestinians from their homes and the process of ethnic cleansing in the city include as well Sheikh Jarrah neighborhood.