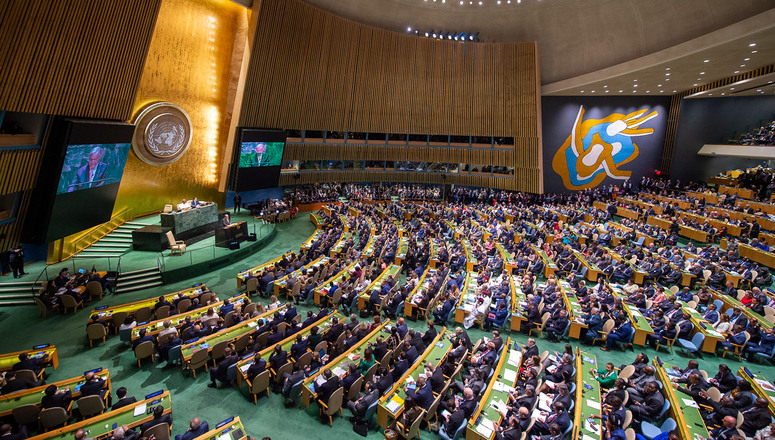 Adopting three resolutions by recorded vote on the questions of Palestine and the Middle East, the UN General Assembly today called for respect for the historic status quo at the holy places of Jerusalem and stressed the need to urgently exert collective efforts to launch credible negotiations on all final status issues in the Middle East peace process.

Through the terms of the text titled “Peaceful settlement of the question of Palestine”, the Assembly reiterated its call for the achievement of a comprehensive, just and lasting peace in the Middle East.  By further terms, it also called upon Israel to cease all unilateral actions in the Occupied Palestinian Territory and called upon all States not to recognize any changes to the pre‑1967 borders and not to render aid or assistance to illegal settlement activities.

Also adopted was a resolution titled “Jerusalem”, in which the Assembly reiterated its determination that any actions taken by Israel, the occupying Power, to impose its laws, jurisdiction and administration on the Holy City of Jerusalem are illegal.  Recalling the 2015 Security Council press statement on Jerusalem, in which the Council called for upholding unchanged the historic status quo at the Haram al‑Sharif, the Assembly stressed that a comprehensive, just and lasting solution to the question of the City of Jerusalem should take into account the legitimate concerns of both the Palestinian and Israeli sides.

“No one is more exhausted than our people,” the Permanent Observer for the State of Palestine said during the debate.  Injustice and loss have defined Palestinian existence across generations, he said, detailing how Palestinian civilians are being killed and injured and their homes destroyed by Israeli airstrikes while settler militias act as mercenaries for the occupation.

Highlighting the resilience shown by the Palestinian people, including during the conflict in May, he said that Israel, under cover of platitudes, is escalating its violations.  That country cannot be allowed to continue its security rhetoric and false accusations, he said, also taking the floor after action to add that the language concerning Jerusalem is in line with the position adopted by the Security Council and voted in favour by all its 15 members.