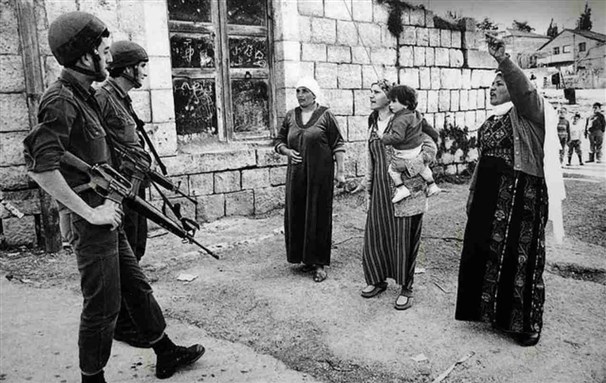 December 8, 1987, marked the official start of the First Intifada. For six years, street battles were fought and won with stones. According to the United Nations, over 1,000 Palestinians were killed from 1987-1993. (Image by Robert Croma via Flickr)

Sitting behind her sewing machine in her house located in the outskirts of Saffa village, 16-kilometers (9 miles) west of Ramallah, Hanan Karajeh, 55, recalls the events that shook the region 34-years ago during the Palestinian First Intifada.

Speaking to Anadolu Agency coinciding with the anniversary of the beginning of the First Intifada, which is being observed on Wednesday, Karajeh said she was secretly making the Palestinian flags for the protesting youth.

“Holding the Palestinian flags at that time was a big deal. For the Israeli army, it was like having a bomb and they were acting very aggressively against anyone who possessed the flag,” she said.

The First Intifada was a sustained series of Palestinian protests that erupted in the West Bank and Gaza on Dec. 8, 1987, against Israeli occupation and lasted until the Madrid Conference in 1991, which then led to the 1993 Oslo Accord and establishment of the Palestinian Authority.

According to B’Tselem -- the Israeli Information Center for Human Rights in the Occupied Territories -- as many as 812 Palestinians including 178 minors got killed during the protests. Israel lost 20 civilians and 14 soldiers in the protests that remained nearly three years.

More than 500,000 Palestinians participated in the First Intifada. Israeli forces also arrested 3,000 women during the protests.

Karajeh recalled that Israeli soldiers attacked her brother when he was 18 years and broke his bones with stones and guns before arresting him.

“Israelis had adopted the most violent policy of breaking bones of protesters during the First Intifada,” she said.

Then a just 21-year-old girl, who had learned tailoring, Karajeh said she was receiving the youth at her sewing room at night-time to give them the flags.

“One day the villagers woke up on the morning and found the biggest flag raised in the village square. They kept wondering for many years and did not know where form it had come,” she said.

Besides making flags for the protesters, she would also participate in the protests in the villages along with her three children.

“Their childhood is rich with brave incidents. They are witness to the army storming our home and beating us, their uncles, and their father,” she added.

Karajeh has also taught other women living in the village the skills of sewing and draping to allow them to earn living.

Recalling that the biggest challenge was to allow children to continue with education, she said that women played a pivotal role to educate children when Israelis had closed all schools and universities.

“We created great teaching and exchanges of experience movement in our village. We exchanged the experiences in sewing, agriculture, academia, and many other productive skills during the days of military blockage,” she said.

Karajeh's house was located near the observation post that made her activity more dangerous. During the demonstrations, she also used to provide first aid to the injured youth.

“One day during the demonstrations near my house, a military plane was throwing poisoned stones on the people. I still remember the moment when I evacuated a person who had lost consciousness to my home. He was dead,” she said.