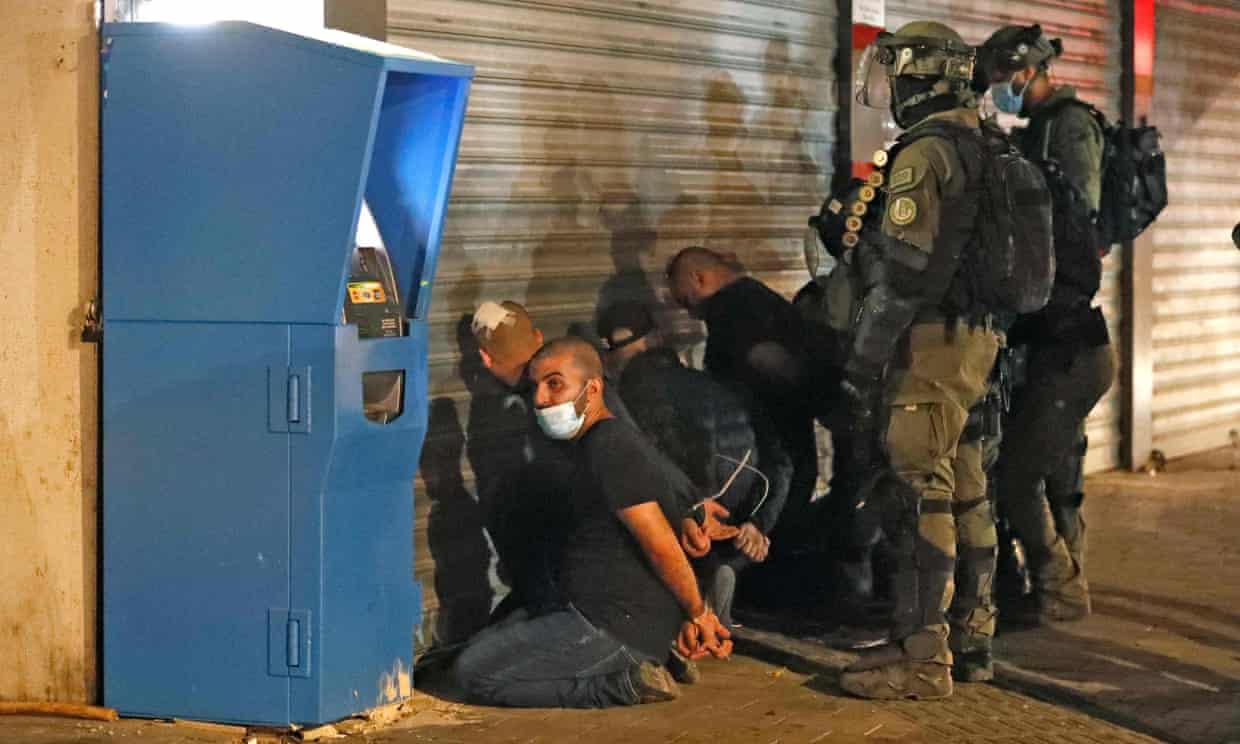 Israeli forces detain a group of Palestinians in the mixed Jewish-Arab city of Lod, May 2021. (Photo: Ahmad Gharabli/AFP/Getty)

HRW said Israeli law enforcement agencies used excessive force to disperse peaceful protests by Palestinians in Lod (al-Lydd) during civil unrest in the city in May 2021, where Israeli police appeared to act half-heartedly and unevenly to violence against Palestinian citizens of Israel committed by Jewish ultra-nationalists. Public statements by senior Israeli officials appeared to encourage discriminatory responses by authorities and the judiciary. The police response in Lod took place amid systematic discrimination that the Israeli government practices against Palestinian citizens of Israel in many other aspects of their lives.

“Israeli authorities responded to the May events in Lod by forcibly dispersing Palestinians protesting peacefully, while using inflammatory rhetoric and failing to act even-handedly as Jewish ultra-nationalists attacked Palestinians,” said Omar Shakir, Israel and Palestine director at Human Rights Watch. “This apparent discriminatory response underscores the reality that the Israeli state apparatus privileges Jewish Israelis at the expense of Palestinians, wherever they live and irrespective of their legal status.”

HRW said the Commission of Inquiry on Israel and the Occupied Palestinian Territory established by the United Nations Human Rights Council in May should investigate these apparently discriminatory practices and whether the inflammatory comments by senior Israeli officials incited violence.

Human Rights Watch in July and October interviewed 10 Lod residents in person, including a current and a former city councilor, relatives of victims, and two Jewish witnesses. Human Rights Watch also conducted analysis and geo-localization of several video clips filmed between May 10 and 14 and published on social media. The evidence indicated that the authorities responded to the events in an apparently discriminatory manner.

Lod, a mixed Jewish and Palestinian city in central Israel, has experienced the rising influence of an ultra-nationalist group, the Garin Torani, which has sought to promote the city’s Jewish identity amid longstanding discrimination against the country’s Palestinian citizens. In 2013, an alleged Garin Torani sympathizer, Yair Revivo of the Likud Party, was elected mayor and has served continuously since then.

Unrest in Lod and in other cities in Israel and the West Bank took place in May against the backdrop of discriminatory efforts to force Palestinians from their homes in occupied East Jerusalem, the use of excessive force by Israeli security forces against protesters and worshippers at the al-Aqsa mosque in Jerusalem, and the eruption on May 10 of hostilities between Israel and Palestinian resistance groups in Gaza that lasted until May 21.

Israeli authorities forcibly dispersed many of the street protests that Palestinians carried out inside Israel and the West Bank during this period.

On the evening of May 10, Palestinians began peacefully protesting outside Lod’s al-Omari mosque against the threatened takeover of Palestinian homes in East Jerusalem. While the police had authorized the demonstration, witnesses said security forces fired teargas and threw stun grenades at the crowd after a young man replaced an Israeli flag with a Palestinian flag on public property. Palestinian demonstrators later set garbage bins, cars, and tires on fire, and confrontations with Jewish residents broke out elsewhere in the city.

In the four days that followed, groups of Palestinian and Jewish rioters separately targeted Jewish and Palestinian properties and places of worship. In addition to the killing of a Jew and a Palestinian, scores were injured, a Muslim cemetery was vandalized, and dozens of cars burned. The government issued an emergency declaration on May 12 aiming to curb the violence, including by prohibiting non-residents from entering Lod.

Israeli authorities and courts handled in starkly different ways the murders of a Palestinian man and of a Jewish Israeli respectively killed by civilians in complex circumstances during the Lod violence. In the murder of Musa Hassuna, a Palestinian, the authorities released all Jewish suspects on bail less than 48 hours after the killing, after they pleaded self-defense. The authorities closed the investigation against them less than six months later without charges. In the murder of Yigal Yehoshua, who is Jewish, eight Palestinian suspects have been detained for months, awaiting prosecution on a number of charges, including “murder as an act of terrorism.” While the victims were killed in different circumstances, one in the midst of a skirmish and the other as he drove home, both cases are muddled and rely on limited and seemingly inconclusive evidence. Yet, one led to indictments while the other did not.

On May 12, scores of Jewish ultra-nationalists who do not live in Lod entered the city, some of them armed, in violation of the government’s emergency declaration issued hours earlier barring non-residents from entering, witnesses told Human Rights Watch. An Israeli journalist reporting from Lod and the sitting city councilor said that municipal authorities hosted the outsiders overnight in a building owned by the city near a Palestinian cemetery. Mayor Revivo denied having been informed of this move or approving it. Overnight, these groups threw stones at Palestinian houses and shops, and at the al-Omari mosque. Video clips of some incidents show police positioned close to Jewish rioters as they throw stones but doing nothing.

Following the May unrest, over about two weeks, security forces detained 2,142 people across Israel and East Jerusalem in a “deterrence” operation that authorities named “Law and Order.” According to Amnesty International, approximately 90 percent of those detained were Palestinian citizens of Israel and residents of East Jerusalem. In a September report, AFP wrote that the Israeli police had confirmed the arrest of 154 people in connection to “disturbances” in Lod. Out of those, 120 were Palestinians.

According to the report, Palestinian citizens of Israel face systematic discrimination in many other facets of life, including with regard to legal status, land policies, and access to resources and services, as Human Rights Watch has documented. This systematic discrimination reflects the Israeli government’s overarching policy to privilege Jewish Israelis at the expense of Palestinians.

Human Rights Watch has found that Israeli authorities are committing the crimes against humanity of apartheid and persecution, based on an Israeli government policy to maintain the domination by Jewish Israelis over Palestinians wherever they live, and grave abuses against Palestinians living in the Occupied Palestinian Territory. The crime of apartheid is committed when these elements come together.

International human rights law requires authorities to provide everyone, without distinction as to race, color, or national or ethnic origin, to equality before the law. The authorities have a duty to protect everyone’s right to life, without discrimination, which requires taking reasonable measure to prevent attacks that threaten life, and to investigate and prosecute those responsible, added HRW.

International human rights law also requires security forces to protect the right to peaceful assembly, regardless of the demonstrators’ political views or identity, without using excessive force. At the same time, law enforcement needs to respond to violent acts in a proportionate manner that minimizes the use of force and protects people and property, without discrimination.

“In Lod, Israeli police and authorities appear to have treated citizens differently based on whether they are Jewish or Palestinian,” Shakir said. “The UN Commission of Inquiry should seize the unprecedented opportunity to tackle the discrimination and other abuses Palestinians in Israel face solely on account of their identity.”

Lod: City with a Long History of Discrimination

Lod, strategically located between Tel Aviv and Jerusalem, came under Israeli control in July 1948. The Israeli historian Benny Morris has said that Israeli forces expelled nearly all of Lod’s inhabitants, under orders from the then-Israeli leader, David Ben Gurion. Historians estimate that Israeli forces expelled between 30,000 and 70,000 Palestinians. The expulsion left fewer than 1,000 Palestinians in the city, a large number of whom worked for the railway company and were needed to operate the train tracks. Israeli forces then distributed the former Palestinian inhabitants’ land and property to Jewish Israeli citizens and destroyed unoccupied houses to prevent their former owners’ return.

Palestinians today make up to 30 percent of the city’s population. They have faced decades of land confiscations and discriminatory land policies, as Human Rights Watch has documented generally for Palestinian citizens of Israel.

In 2013, Lod residents elected as mayor Yair Revivo, of the Likud Party and a reported sympathizer of the ultra-nationalist group Garin Torani (Torah Seed). The group seeks to promote the Jewish presence within cities that have sizable Palestinian minorities inside Israel, including Lod. Jewish and Palestinian residents of Lod who spoke to Human Rights Watch said that the group’s growing influence and the influx of Jews who lived in settlements in Gaza before they were dismantled in 2005 has further strained Jewish-Palestinian relations in the city.

Maha al-Naqeeb, a former city councilor, said that “discrimination, racism and the existence of settler groups inside Arab neighborhoods” has created “an accumulation of anger and frustration” among the city’s Palestinian residents.

Ghassan Mounayer, a social activist from Lod and adviser to a Knesset member, said that Palestinians in the city face “a reality of house demolitions and displacement. Every time they see a police vehicle, they think they are coming to demolish their house.”

Tayseer Shaaban, a Palestinian lawyer and Lod resident, said the May protests and riots are a result of “frustration” with “years of racism, discrimination, and neglect by the municipality.”