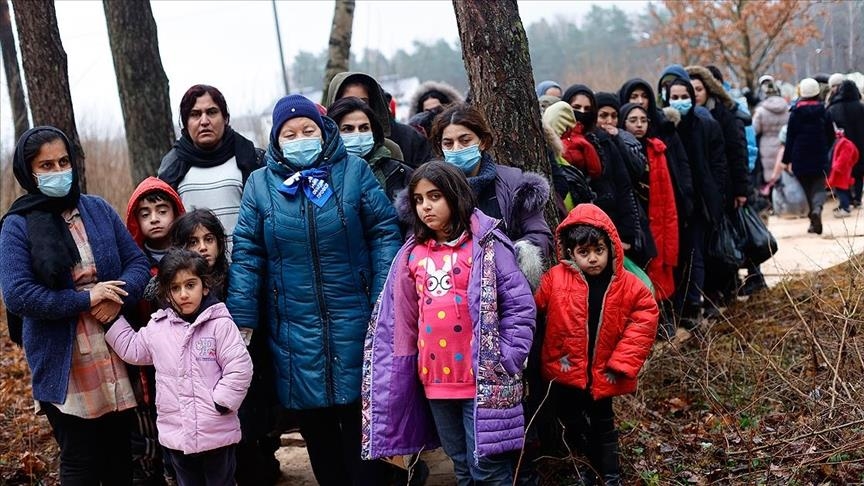 Migrants stranded on the border between Poland and Belarus. (File photo via Anadolu)

Palestinian refugees stranded on the borders between Poland and Belarus have voiced deep anxiety as Belarus has forced refugees to return to Syria despite being wanted by the regime of Bashar al-Assad, in an effort to rid itself of the thousands of asylum seekers trafficked to the country in recent months.

Since September, migrants and refugees from countries such as Syria and Iraq were trafficked to Minsk by a consortium of smugglers and airlines, and have amassed at Belarus's border with Poland and other nearby states.

Thousands of the migrants, among them Palestinians from war-torn Syria, were held at Belarus's border with Poland in particular, where Belarusian forces reportedly beat, abused, and forced them to cross the border in harsh weather conditions.

Warsaw has accused Minsk of attempting to cause a confrontation by using the asylum seekers to cross into European Union (EU) states as a way of taking revenge for Western sanctions, and last month the Belarusian president Alexander Lukashenko admitted that his forces may have helped them enter the country.

While many of the migrants have resorted to being repatriated back to Iraq and Syria, a report by the US-based media outlet National Public Radio (NPR) has revealed that Belarusian authorities forced some refugees to return to Syria despite facing potential danger there.

The 24th report of the UN Syria Commission of Inquiry released on September 14 stressed that the country is not fit for safe and dignified returns of refugees.

“One decade in, the parties to the conflict continue to perpetrate war crimes and crimes against humanity and infringing the basic human rights of Syrians. The war on Syrian civilians continues, and it is difficult for them to find security or safe haven in this war-torn country,” the Chair of the Commission, Paulo Pinheiro told a press conference in Geneva at the time.

“The overall situation in Syria looks increasingly bleak. In addition to intensifying violence, the economy is plummeting, Mesopotamia’s famous riverbeds are at their driest in decades, and widespread community transmission of the COVID-19 seems unstoppable by a health care system decimated by the war and lacking oxygen and vaccines. This is no time for anyone to think that Syria is a country fit for its refugees to return”, Commissioner Karen Koning AbuZayd stated.