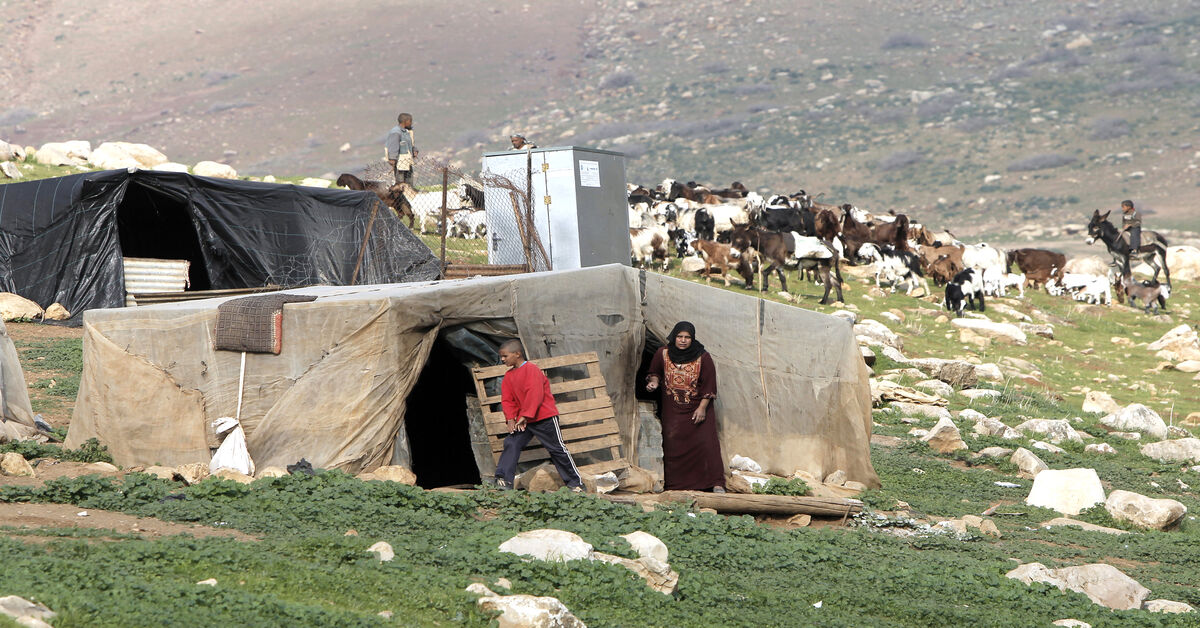 Palestinian Bedouins prepare to evacuate as the Israeli army readies to carry out military exercises in the Wadi al-Maleh area, in the north of the Jordan Valley, West Bank, Jan. 2, 2013. - Ahmad Gharabli/AFP via Getty Images

For nearly one month, many families residents of Khirbet Ibziq, north of Tubas in the northern occupied Jordan Valley, have been living in a state of instability due to their expulsion and eviction from their homes to conduct military training nearby for the Israeli occupation army, reported WAFA news agency.

As a result, these families spent many difficult days and nights, wandering in the open fields and among the slopes of the mountains where they spent more time than in their homes throughout this month.

These same families were surprised the day before yesterday by a large Israeli army force storming their community and demolishing their tents, leveling them to the ground.

In the end, structures for 11 families in Khirbet Ibziq were leveled to the ground, six of whom were completely demolished by the occupation forces, while five families were forced to tear down their facilities by themselves, according to Motaz Bisharat, an official with Tubas governorate.

Abu Mahmoud Turkman, one of the citizens whose facilities were demolished, told WAFA that his family has not had a day of peace since the beginning of this month when the army training began in Khirbet Ibziq and its surroundings. He, and other residents, was ordered by the Israeli forces to evacuate their homes several times so that the army can conduct its military exercises near their community. Each time, these families and their children would find themselves living in the open fields in the foothills of the mountains.

The Israeli forces demolished eight tents for the Turkman family, some were used as a shelter for his family and others to keep his livestock and store fodder, in addition to destroying water tanks and solar panels that they used to generate electric power.

The occupation soldiers did not allow the families to take out anything of their belongings and clothes before the demolition, and they also were not allowed to take out their supplies and foodstuffs.

Turkman says the occupation authorities aim by this to expel them from their homes and lands in order to seize them, pointing out that every time the military officer in charge notifies them to evacuate their homes in order to conduct training, he would tell them to leave the Khirbet for good, but he would categorically refuse to do that.

Across from the Turkman tents, Mustafa Nasrallah was living with his family before he was forced to demolish his tents and facilities with his own hands.

Nasrallah took what was left of the material he used to build the shelters with him to the nearby slopes, hoping to use them in some way to make shelters for his four children, the youngest of whom is three years old, to protect them from the severe desert cold conditions.

According to the head of Khirbet Ibziq village council, Abdul Majeed Khdeirat, the residents have had very difficult days since the beginning of this month. The army training has not stopped throughout the month and it was conducted in the fields planted with crops and near and between the homes, posing great dangers to the resident and their lives. The shells were falling near their homes and there were great fears from the remnants of these shells.

"Although the exercises were continuous throughout the month, the past two days were the most difficult for the residents," said Khdeirat. "Khirbet Ibziq was more like a battlefield due to the momentum of the exercises and the number of forces and vehicles participating in them, as hundreds of soldiers spread out in the vicinity of the village, in addition to the participation of more than 150 vehicles, including tanks and military jeeps. In addition to this, the exercises coincided with the demolition of homes and facilities."

The exercises taking place in Khirbet Ibziq have so far resulted in the destruction and sabotage of nearly 400 dunums of planted land, according to Khdeirat, and when the training, which will continue until next month, ends, it will be difficult to remedy the situation and salvage the season, which means that the farmers have been permanently deprived of their crops, which makes their situation more difficult. These families depend mainly on these crops to provide them with wheat, barley and other rainfed crops for their livestock, he said.

Khdeirat asserts that the training in Khirbet Ibziq and its surroundings is almost permanent. Every year, the occupation army holds training for six months of the year, and not necessarily in a row.

All of this makes people’s life highly unstable throughout the year, not to mention the psychological effects on the entire population, especially children, who live in constant fear due to the sounds of shells and the movement of military vehicles in close proximity to them, as well as the danger of being killed from the remnants left behind. Over the years, many people have been killed or injured as a result of these remnants.