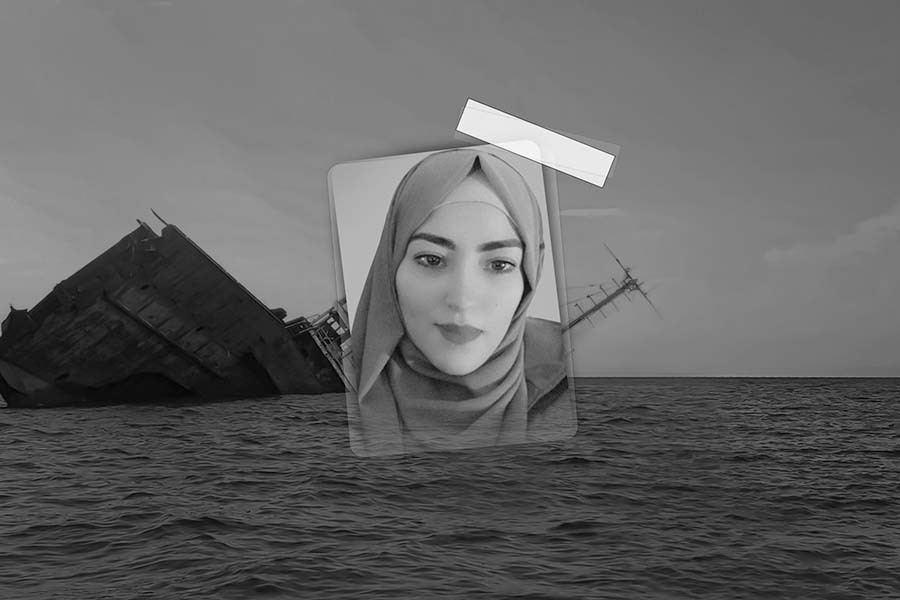 “This week, I woke up to the heart-breaking news that my daughter breathed her last at sea. I wish I could have hugged her so tight”, said Mohammad Alaidy, who has just lost his daughter Rawnd in the Greece migrant boat accident.

Rawnd Alayde, a Palestinian-Syrian refugee is among at least 16 people whose bodies were found dead late Friday in the Aegean Sea after a boat carrying migrants capsized, the third episode in three days that when combined have led to over 30 deaths this past week in Greek waters.

Sixty-three people were rescued in what the Greek Coast Guard described in a statement as a “gigantic” operation that began Friday, after a boat foundered off the island of Paros, and that continued Saturday morning. Rescue teams are still searching for survivors from the two earlier wrecks, which were farther south in the Aegean, off the islands of Folegandros and Antikythera.

A wreck of a migrant boat late Tuesday off the island of Folegandros also left at least three people dead and dozens unaccounted for.

Rawnd, born on November 21, 1998, risked her life onboard the Greek-bound “death boat” whishing to reunite with her family and her father whom she has not seen for ten years. Like the other victims, she did not know that death had quicker wings than the vessel she boarded as she dreamt to re-establish some sense of normalcy to her life

“Authorities could have saved her life had they granted her the right to reunite with us”, her father told PRC. “My daughter is the victim of the social and legal discrimination Palestinian refugees from Syria are typically subjected to”.

“My eldest daughter died because the family reunification procedure excluded her”, her father confirmed.

According to German Law, adult children are not entitled to family reunification. But they can request familyreunification and can be granted under special conditions.

In a report issued by PRC in 2018, following an interview with Mohammad and his family, the father conveyed to us his fear. Deep inside he felt something tragic was about to happen, soon, very soon.

The report is available here:

“I can’t sleep, I can’t eat because I am so scared that Germany won’t include her in my requestfor family reunification. And if they don’t then it’s a catastrophe because I haven’t seen them in six years”, he said at the time.

In Jordan, a staff member of the German Embassy obliged Rawnd to sign a document. Later on, she learnt that her demand was turned down. She burst into tears and fell into a faint. The staffer insulted her: “Come on it’s not an execution decision”. For Rawnd, the decision amounted to a life-sentence with a stay of execution.

In the 2018 report, the family recalled the initial displacement that took place due to Syrian government airstrikes destroying their home. Mohammad Alaidy and his wife Um Rawnd (Rawnd’s mother) used to live together in Yarmouk until 2012 when they split seeking refuge from the ongoing Syrian conflict.

In October 2017, we interviewed Um Rawnd at her home in the Zarqa governorate, north-east ofAmman. Um Rawnd was born in Jordan, moved to Syria in 1997 and married Mohammad.

In November 2012, Um Rawnd fled her home as the Syrian uprising quickly escalated into an armed conflict. Um Rawnd’s home was destroyed after Syrian government airstrikes hit Yarmouk Camp. Given that Um Rawnd is a Palestinian withJordanian citizenship, it led her to think she could seek refuge with her parents in Jordan.

Um Rawnd’s husband, Mohammad, was also interviewed by PRC in November 2017. Mohammad was born and raised in Syria. They used to own a house on Safad Street in Yarmoukcamp.

Mohammad fled Syria in 2015, after Daesh (ISIS) entered Yarmouk. Throughoutthe war, he used to be an ambulance driver for the Syrian branch of the Palestine Red CrescentSociety (PRCS) and while on duty almost got hit by airstrikes and shelling on multiple occasions.

With the emergence of the Syrian conflict Palestinian refugees started to be framed as asecurity threat.

“Amid the rising violence in Yarmouk, Rawnd and her sister were increasingly distraught by the terrorising sound of airplanes and airstrikes”, said Mohammad.“Eventually, my wife and daughters wereable to enter Jordan without me. Unable to join them, I continued to look after their belongingsand hoped to reunite with them soon.”

And then the siege came. “I used to weigh 105 Kilos, I became 41 kilos then. I ate birds legs, Idrank water with salt and pepper, I ate grass, I knew of people who cooked cats, dogs”, Mohammadrecalled. “If us, young people barely got through this, then how did the old and the very young

Starvation did become a weapon in Yarmouk. The camp had been under siege bySyrian government forces since December 2012 after armed rebels entered the camp. Around 200have died from starvation there after government forces “began to prevent all access to Yarmouk”.

He was smuggled into Turkey through the mountains, thenthrough Greece, Serbia, Macedonia and he finally reached Germany in November 2015. He was given a residence in the city of Kiel, the capital and most populous city in the northern German state ofSchleswig-Holstein.”

“I remember once, my daughters asked me for gifts on Eid, and I couldn’t really sendthem anything.”

The warfare in Syria, which has now entered its eleventh year, has had traumatic fallouts on Rawnd. Post-traumatic stress disorders, mental psychosis, sleeplessness and nightmares, eating disorders, and intense fear have all been suffered by Rawnd.

Rawnd who sank into despair had kept dreaming of a better future with her family and of a spark of light at the end of the tunnel. Her biggest dream was to live in a world where humanity matters more than identity.

The German authorities could have saved Rawnd’s life by granting her humanitarian asylum and authorizing her reunification with her family.

An independent fact-finding probe should be immediately launched to determine to root causes of the Greece boat tragedy and hold those responsible for the migrant deaths to account.

Protection of the family unit is a fundamental human right. Separation of families are of particular concern when they lead to migrant girls being separated from their legal guardians or left unaccompanied. The longer-term separation of families due to migration, in particular when girls, like Rawnd, grow up in a host country without one or both parents, can also have a range of psychological, social and other adverse repercussions.

While Germany or any other State has the right to determine the conditions of entry, stay and the status of family members in their territories, the importance of family unity and its potential benefits for both migrants and their host communities should form a key part of migration policy considerations.