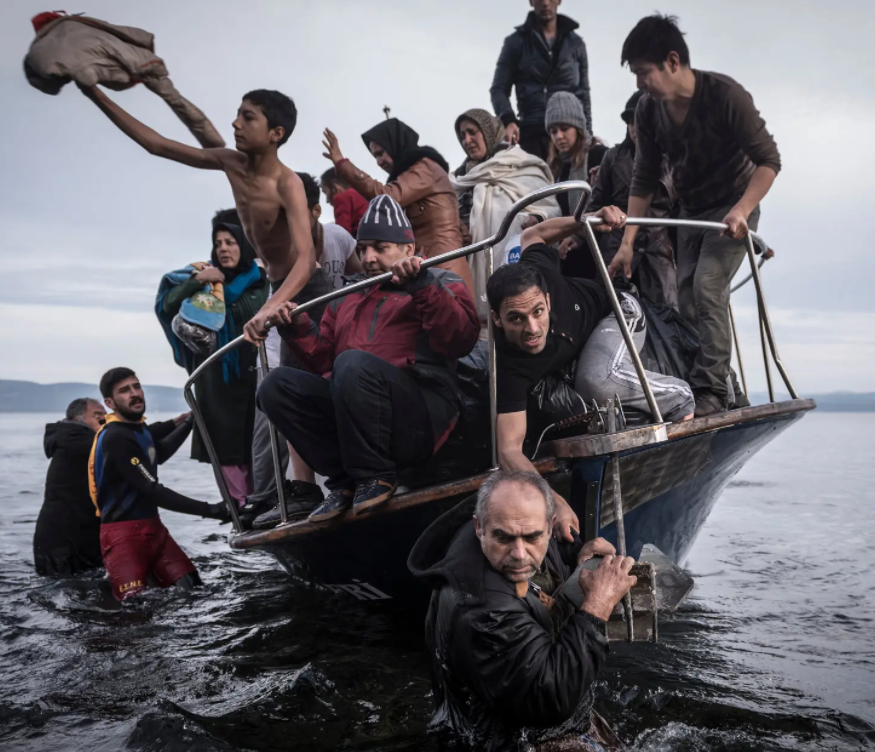 Migrants onboard a Greece-bound vessel. (File photo via The New York Times)

The London-based Action Group for Palestinians of Syria (AGPS) has conducted an interview with the father of Palestinian refugee Rawnd Alayedi, who drowned at sea after a boat capsized off a Greek coast on Friday, December 24.

Rawnd Alayde,  a Palestinian-Syrian refugee born on November 21, 1998, risked her life onboard the Greek-bound “death boat” whishing to reunite with her family whom she has not seen for over six years after the German authorities turned their back on her appeals for family reunion, forcing her to seek alternative routes.

Rawnd’s mother holds Jordanian citizenship. She fled war-torn Syria to Jordan with her five children, the eldest of them is Rawnd. The father remained in the then-besieged Yarmouk Camp, where he worked as a rescuer tending to wounded people. He was later displaced to Idlib and reached Turkey shortly after. The family, except for Rawnd, managed to obtain asylum in Germany.

The father, Mohamed AlAyedi, told AGPS that the German embassy in Jordan invited his wife and daughters for an interview. At the time, Rawnd was aged 19. One month later, the family showed up at the embassy to receive their visas. Only Rawnd was excluded on claims she is aged over 18.

“A staff member of the German Embassy obliged Rawnd to sign a document. Later on, she learnt that her demand was turned down. She burst into tears and fell into a faint”, the father said. “The staffer insulted her: ‘Come on it’s not an execution decision’. For my daughter, the decision amounted to a life-sentence with a stay of execution.”

“My daughter remained in her grandfather’s house while my wife and four sisters joined me in Germany in 2018. Rawnd had gone through hard times due to her separation from us. My wife’s appeals to the Red Cross, churches, and human rights organizations have gone unheeded.”

“We’ve had no option left than to seek alternative routes. We’d left no stone unturned to have Rawnd reunite with us in Germany. We raised funds for her after we learnt that migrants have reached the EU through a smuggler called Abu Nasser. The latter smuggles refugees from Turkey to Italy by sea. They are then transferred to Germany through a private car. The trip costs 9,700 Euros”.

The smuggler told the family that “the sea is calm this week. She will disembark in Italy and be transferred to Germany just two days later. No more than 45 migrants will be onboard.”

“On the day of the tragedy, the migrants were gathered in Izmir and crammed in a truck bound for the smuggling shore. The trip was delayed due to heavy patrolling by Turkish police and army”, the father added.

On Friday, at 5 a.m., Rawnd told her father that she had to switch off her mobile phone as the vessel was about to set sail. As many as 88 migrants were onboard, two times the real capacity of the vessel.

At 6:50 p.m. the father received a phone call from the smuggler’s relative who told him that the boat engine broke down off a Greek island due to unstable weather conditions. Shortly after, water began to seep into the boat.

One of the three captains, all Syrians, climbed over the sail. The panic-stricken migrants started screaming and calling for help. As the boat leaned, desperate people started jumping into the water to try to swim toward the shore which was 9 km away. A fishing vessel rescued a number of migrants. Greece coast guards showed up in the scene two hours and a half after they received emergency calls. The initial search and rescue operation lasted for over eight hours.

Mohammed said until Monday 5 p.m. the condition and whereabouts of the missing migrants had been kept under wraps. “We’ve had sleepless nights and nightmarish times. We were later told that 12 people died and others have been unaccounted for”.

“There was a young man accompanying Rawnd in the trip. I begged him to tell me the truth. I learnt that my daughter and all the other women onboard breathed their last at sea”.

Mohamed traveled to Athens to follow-up on his daughter’s case. The Palestine Embassy promised to bring his daughter’s body. “All my wife dreams of now is to kiss her daughter for the last time, to bid her last farewell”.

Alayedi said his daughter is among 18 people who died in the tragic accident. He held smugglers accountable for what he called “murder at sea”.

AGPS said it believes that authorities could have saved Rawnd’s and other refugees’ lives had they granted them the right to humanitarian asylum and to family reunion.

AGPS said the tragedy is the result of the denial of the right to family reunification by German and other EU States which continue to overlook the fact that protection of the family unit is a fundamental human right.

PRC has been receiving deeply alarming reports about what the Greek Coast Guard described in a statement as a “gigantic” operation that began on Friday, December 24, after a boat foundered off the island of Paros. Rescue teams are still searching for survivors from the two earlier wrecks, which were farther south in the Aegean, off the islands of Folegandros and Antikythera. One of the wrecks occurred late Tuesday off the island of Folegandrosalso and left at least three people dead and dozens unaccounted for.

Separation of families are of particular concern when they lead to migrant boys and girls being separated from their legal guardians or left unaccompanied. The longer-term separation of families due to migration, in particular when girls, like Rawnd, grow up in a host country without one or both parents, can also have a range of psychological, social and other adverse repercussions.

While EU States have the right to determine the conditions of entry, stay and the status of family members in their territories, EU governments should remember that the importance of family unity and its potential benefits for both migrants and their host communities should form a key part of migration policy considerations in Europe.

The EU and European Parliament should immediately embark on a fact-finding probe to determine the root causes of the Greece boat tragedy and hold those responsible for the migrant deaths to account in order to save more lives and help bring such crimes against humanity to a halt.

The EU should urgently reconsider its migration policy and family reunion red tape at embassies, migration departments, and consulates in host countries and to work on protecting the lives of migrants, among them hundreds of children, who are the victims of displacement, poverty, and economic marginalization.