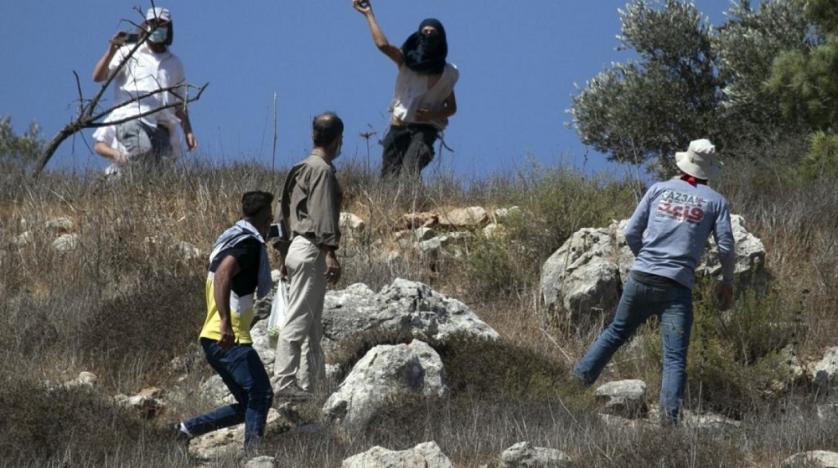 Masked Israeli settlers attack Palestinian olive farmers from the village of Hawara on fields near the settlement of Yitzhar in the Israeli-occupied West Bank, on October 7, 2020. (AFP)

Hordes of Israeli settlers on Monday chopped down over 100 olive trees in the Rashaydeh village, east of the southern West Bank city of Bethlehem, according to a local official.

Hasan Breijieh, director of the local office of the Wall and Settlements Resistance Commission, told Palestinian news agency WAFA that Israelis from the illegal settlement of Abi Hanahal destroyed 100 olive trees in the village.

He said that before this act, the settlers had let their cattle loose in the village’s farmland to ravage the crops.

According to data by the Israeli human rights centre B’Tselem, Israel has built more than 280 settlements in the West Bank, which are home to more than 440,000 settlers. Of these settlements, 138 were officially established and recognized by the state (not including the 12 neighborhoods Israel built in the areas it annexed to Jerusalem), and some 150 are outposts not officially recognized by the state. About a third of the outposts have been built over the past decade, most of them referred to as “farms”.

West Bank settlements dominate hundreds of thousands of dunams [1 dunam = 1,000 square meters] to which Palestinians have limited access or none at all. Israel has taken over some of these areas using official means: issuing military orders, declaring the area “state land,” a “firing zone” or a “nature reserve”, and expropriating land. Other areas have been effectively taken over by settlers through daily acts of violence, including attacks on Palestinians and their property.