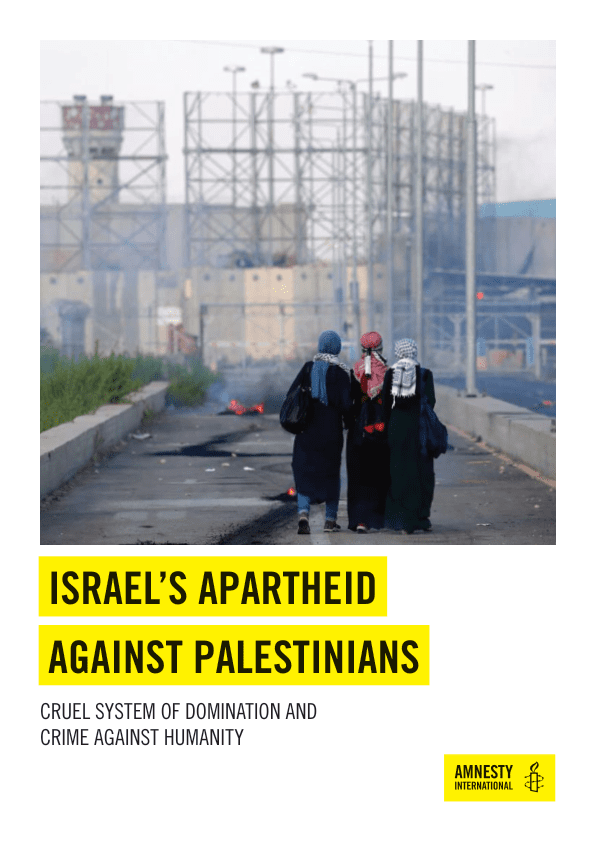 Israeli authorities must be held accountable for committing the crime of apartheid against Palestinians, Amnesty International said on Tuesday day in a new report.

Amnesty said an investigation it conducted as part of the report details how Israel enforces a system of oppression and domination against the Palestinian people wherever it has control over their rights. This includes Palestinians living in Israel and the Occupied Palestinian Territories (OPT), as well as displaced refugees in other countries.

The comprehensive report, “Israel’s Apartheid against Palestinians: Cruel System of Domination and Crime against Humanity”, sets out how massive seizures of Palestinian land and property, unlawful killings, forcible transfer, drastic movement restrictions, and the denial of nationality and citizenship to Palestinians are all components of a system which amounts to apartheid under international law. This system is maintained by violations which Amnesty International found to constitute apartheid as a crime against humanity, as defined in the Rome Statute and Apartheid Convention.

“There is no possible justification for a system built around the institutionalized and prolonged racist oppression of millions of people”, said Amnesty. “Apartheid has no place in our world, and states which choose to make allowances for Israel will find themselves on the wrong side of history. Governments who continue to supply Israel with arms and shield it from accountability at the UN are supporting a system of apartheid, undermining the international legal order, and exacerbating the suffering of the Palestinian people.”

Amnesty said the international community must face up to the reality of Israel’s apartheid, and pursue the many avenues to justice which remain shamefully unexplored.

In international criminal law, specific unlawful acts which are committed within a system of oppression and domination, with the intention of maintaining it, constitute the crime against humanity of apartheid. These acts are set out in the Apartheid Convention and the Rome Statute, and include unlawful killing, torture, forcible transfer, and the denial of basic rights and freedoms.

Amnesty International documented acts proscribed in the Apartheid Convention and Rome Statute in all the areas Israel controls, although they occur more frequently and violently in the OPT than in Israel. Israeli authorities enact multiple measures to deliberately deny Palestinians their basic rights and freedoms, including draconian movement restrictions in the OPT, chronic discriminatory underinvestment in Palestinian communities in Israel, and the denial of refugees’ right to return. The report also documents forcible transfer, administrative detention, torture, and unlawful killings, in both Israel and the OPT.

The report said the unlawful killing of Palestinian protesters is perhaps the clearest illustration of how Israeli authorities use proscribed acts to maintain the status quo.