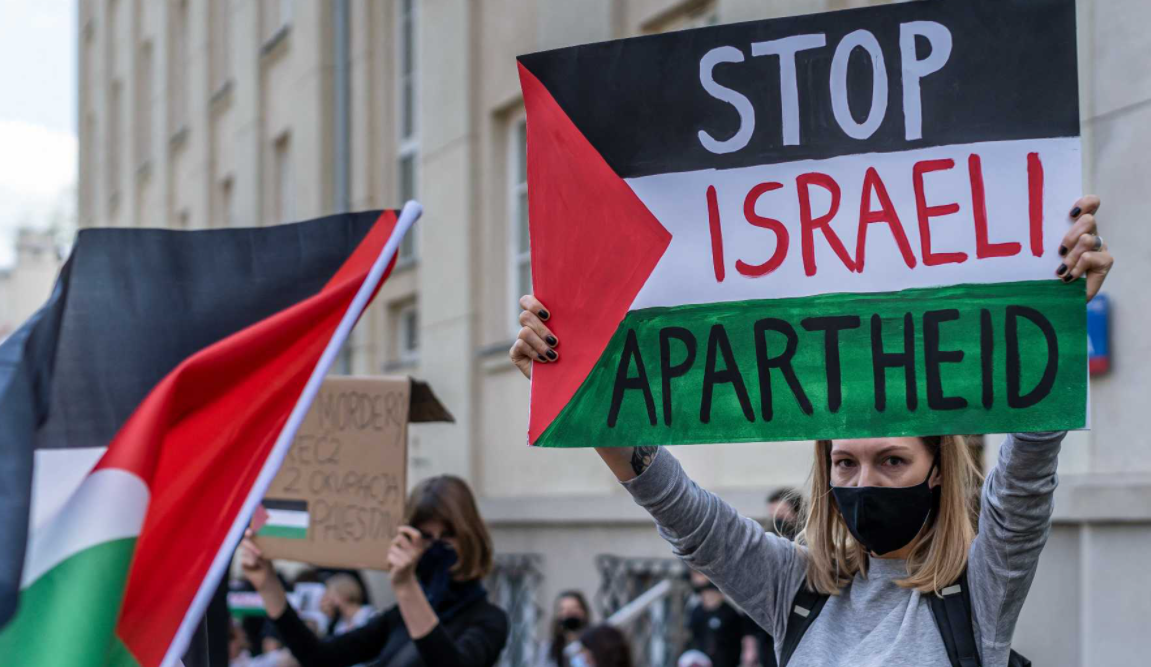 A woman holds up a banner reading 'Stop Israeli apartheid' during a solidarity vigil with the Palestinians on 15 May 2021. (AFP)

The Israeli regime banned Palestinians their right to reunite with their families, confirming recent charges by rights groups that Israel acts as an apartheid regime against the Palestinians.

Palestinian media reported on Sunday that right-wing Israeli minister of interior, Eyelet Shaked, was pushing her administration to support a law that bans Palestinians from the occupied territories married to Palestinians living inside Israel from uniting with their spouses and families.

Shaked, a staunch opponent of uniting Palestinian families, further said that the law will be brought again before the Knesset (parliament) on Wednesday for a vote, expecting that lawmakers were going this time to uphold the ban.

In July last year, the Israeli Knesset, voted not to renew the law, which came up every year since 2003 for a vote and was constantly upheld.

The move had opened the way for thousands of Palestinians who applied over the years to be unified with their families inside Israel or in the occupied East al-Quds to demand a review of their application.

However, Shaked, in her capacity as interior minister, has refused to consider any application since the law was repealed in July.

The latest developments also come days after an international rights group said in a recent report that Israeli authorities must be held accountable for enforcing a system of oppression and domination against Palestinians.

Released on Tuesday, the 280-page report details how Israeli authorities enforce a system of oppression and domination against the Palestinians.

Israel is carrying out “the crime of apartheid against Palestinians” and must be held accountable for treating them as “an inferior racial group.”

The report lists a range of Israeli abuses, including extensive seizures of Palestinian land and property, unlawful killings, forcible transfer, drastic movement restrictions, administrative detention and the denial of nationality and citizenship to Palestinians.

The group in a separate statement described these as components of a system that amounts to apartheid under international law. “This system is maintained by violations which the group found to constitute apartheid as a crime against humanity.”

Last year, more than 600 scholars, artists, and intellectuals from over 45 countries across the world  lambasted the Israeli practices against Palestinians, calling for an immediate end to “Israel’s apartheid regime” in the occupied territories.

Back in July 2018, Israel’s parliament (Knesset) adopted a controversial bill that declares the occupying entity as the so-called “nation-state of the Jewish people.”

The law prioritizes “Jewish” values over democratic ones in the occupied territories, declares Jerusalem al-Quds the “capital” of Israel, allows Jewish-only communities, sets Hebrew as the official language of Israel, and relegates Arabic from an official language to one with “special status.”