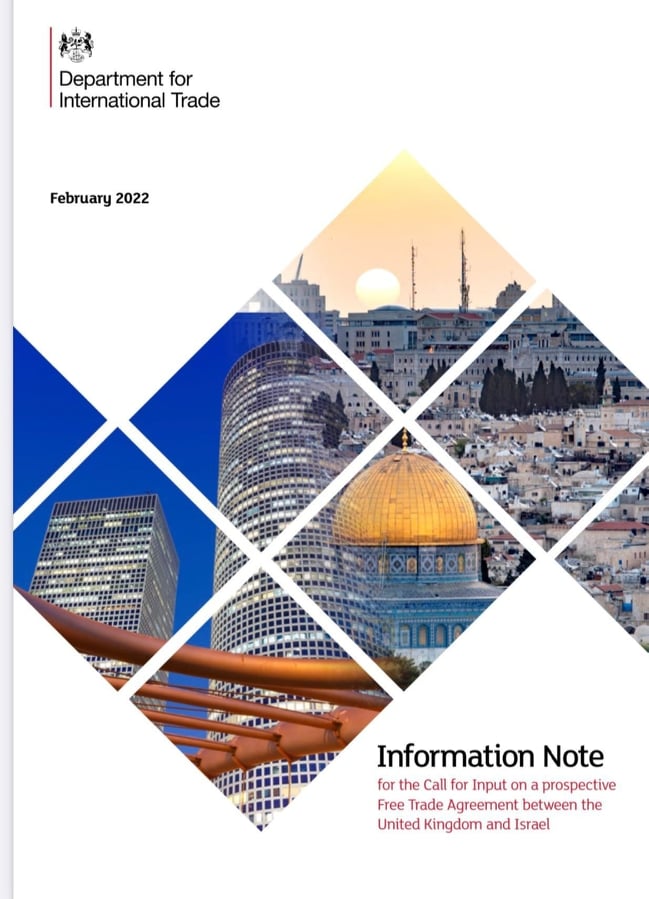 A recent agreement between Britain and Israel to upgrade free trade has sparked widespread roar among human rights champions and Palestinian refugee communities who already view Britain as a party responsible for their protracted displacement due to its Balfour Declaration 1917.

Last week, Israeli Economy Minister Orna Barbivai and British Secretary of State for International Trade Anne-Marie Trevelyan agreed at a meeting held in Jerusalem on a new trade deal that will lead to the removal of barriers in the goods and services trade between the two countries.

The free trade agreement between Israel and Britain was signed in 2019 and took effect at the beginning of 2021.

The ministers also discussed the creation of joint platforms for businesses and the details of a planned Britain-Israel innovation summit this spring, with the participation of senior government officials, business representatives, chambers of commerce and more.

A booklet issued by the UK Department of International Trade (DIT) in February 2022 and, controversially, featuring the Dome of the Rock on its cover states that the UK government’s ambition is to secure free trade agreements (FTAs) with countries covering 80% of UK trade by the end of 2022.

“The Partnership Agreement provides the basis for our trading relationship with Israel and is a platform from which we can begin the process of negotiating a new and more ambitious trade deal”, the document reads.

“We have agreed with Israel that we will open negotiations to upgrade our trade arrangements during 2022”, adds the document which aims to provide background information on current trade flows between the UK and Israel. “In advance of agreeing a UK mandate for these negotiations, DIT is seeking input from members of the public, businesses, and any other interested stakeholders to our negotiation objectives and understanding of the economic, environmental and social impacts of an enhanced FTA with Israel”.

The controversial featuring in the initial version of the document of the Dome of the Rock, an Islamic shrine located on the Temple Mount in the Old City of occupied Jerusalem, has sparked suspicions over Britain’s shifting position regarding the occupied status of the holy city. Following pressure by human rights watchdogs, the photo was removed from the document.

During the Six-Day Israeli war in 1967, Israeli forces captured the Old City along with the rest of East Jerusalem, subsequently annexing them as Israeli territory and reuniting them with the western part of the city.

Today, the Israeli government controls the entire area, which it considers part of its self-proclaimed capital. However, the Jerusalem Law of 1980, which illegally annexed East Jerusalem to Israel, was declared null and void by United Nations Security Council Resolution 478. East Jerusalem is now regarded by the international community and Britain itself as part of occupied Palestinian territory.

Further, human rights groups and NGOs find the document as a sign of Britain’s perplexing stance towards the Palestinian-Israeli conflict. On the one hand, London has criticised Israeli human rights abuses and illegal settlement expansion in the occupied Palestinian territories.

David Cameron, one of Britain’s most pro-Israel prime ministers in living memory, warned in 2010 that Israel’s siege on the Gaza Strip had turned it into a “prison camp”. Commentators argue that now Britain wants to maintain Israel as a key arms client, trade partner, and ally so it can have strategic influence in the Middle East.

In response to the agreement, Palestinian refugees and CSOs posting on social media have never ceased to remind the UK and the international community that it was Britain that initially facilitated the creation of the state of Israel on usurped Palestinian land following the 1917 Balfour Declaration, begetting the Mandate for Palestine which set the foundations for a future Jewish state in historic Palestine.

A number of refugees consider the agreement as another version of the Balfour Declaration as it turns blind eyes and deaf ears to Israel’s involvement in human rights violations, land grab, theft of Palestinian natural resources, and illegal settlement activity on land taken from the Palestinians at gunpoint.