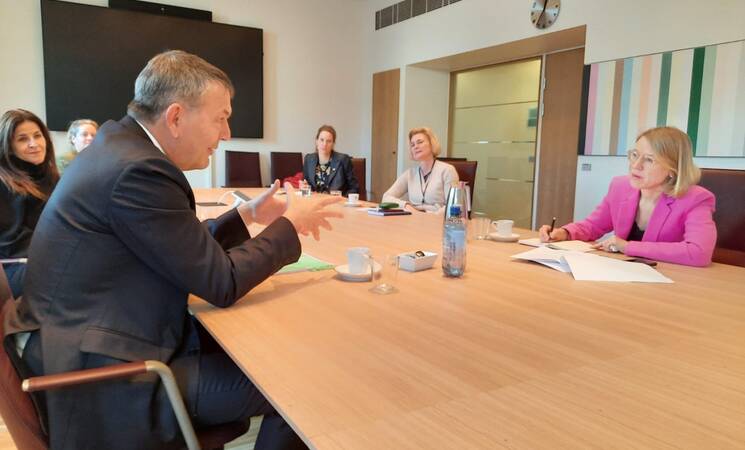 On 11 February, the Norwegian Minister of Foreign Affairs, Anniken Huitfelt, announced a landmark multiyear agreement that will see Norway contribute a total of NOK 1.1 billion (approximately US$ 124.5 million) over a period of four years to support UNRWA’s core and humanitarian services.

This generous contribution was agreed at a meeting with the Commissioner-General of the United Nations Relief and Works Agency for Palestine Refugees in the Near East (UNRWA), Philippe Lazzarini, while conducting his first official mission to Oslo.

Of this multi-year support, the first of its kind with Norway, NOK 700 million will enable the continuation of vital assistance to Palestine refugees – including education, health care, relief and social services – while NOK 400 million will be used to deliver emergency assistance for the next four years. Norwegian humanitarian assistance will be targeted towards child protection and initiatives to combat sexual and gender-based violence.

Following the announcement, Minister Huitfelt said: “I am deeply concerned about UNRWA’s financial situation. UNRWA plays a key role in ensuring that the rights and basic needs of Palestine refugees are met and promoting stability in the Middle East. This is why Norway is now increasing its funding for UNRWA and will provide a total of NOK 1.1 billion over a period of four years.”

Commissioner-General Lazzarini commended this contribution: “We are extremely grateful for the close partnership between Norway and UNRWA, which has extended over decades. This newly announced multiyear support, at an increased amount, represents Norway’s steadfast commitment to Palestine refugees and will enable the Agency to continue delivering critical services, including education for over half a million children.”

The two-day trip to Oslo aimed to further strengthen the Agency’s strategic partnership with Norway. The Commissioner-General held meetings with representatives from the Foreign Ministry and members of the Parliament’s Standing Committee on Foreign Affairs and Defence. He also met with Jan Egeland, Secretary General of the Norwegian Refugee Council (NRC), and researchers from the Peace Research Institute Oslo (PRIO).

Throughout all his meetings, Lazzarini addressed the situation in the Middle East and the existential challenges facing the Agency amidst conflicts, crises and the pandemic. He highlighted the Agency’s urgent need for predictable, sufficient and sustainable funding to fulfil its United Nations mandate and ensure its stabilizing role in the region.

Norway is an active and supportive partner of UNRWA. In 2021, Norway contributed NOK 165 million (US$ 19.2 million) to the PB, NOK 84 million to the UNRWA Emergency Appeals (US$ 10 million), and NOK 8 million for the oPt Flash Appeal (US$ 1 million), which included top-ups to the UNRWA Syria Emergency Appeal in November and the Agency’s Programme Budget in December.