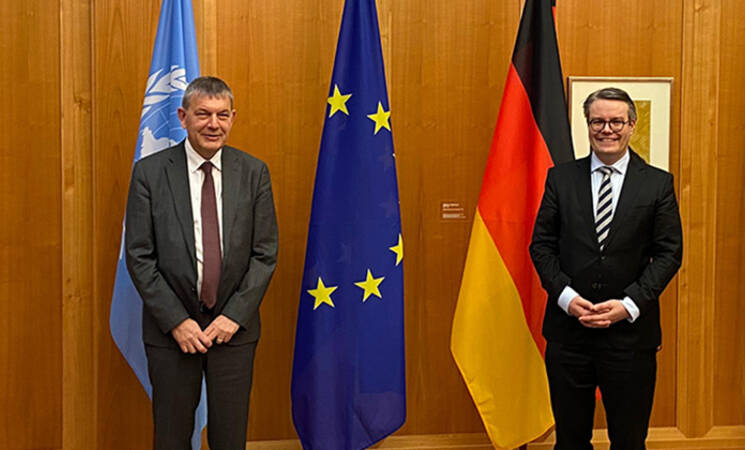 The Commissioner-General of the United Nations Relief and Works Agency for Palestine Refugees in the Near East (UNRWA), Philippe Lazzarini, concluded a three-day visit to Berlin, his first visit to Germany since the national federal elections held on 26 September 2021.

UNRWA said in a press release that the 14-16 February visit aimed to present the critical role UNRWA plays in stabilizing the Middle East to representatives of the newly formed German Parliament and Government and to explore avenues to enhance the partnership between UNRWA and the Federal Republic of Germany, at a critical juncture of the Agency’s existence.

Lazzarini also had meetings at the Chancellery, with key Members of Parliament from the Social-Democrats, Greens, Liberals and Christian Democrats, as well as with the Israeli Ambassador and with other prominent representatives of foreign affairs think tanks.

In Berlin, Lazzarini stressed the continued relevance of UNRWA and its critical role in ensuring that Palestine refugees achieve their right to a dignified life, as per the Agency’s mandate. In a region rife with conflicts, political instability and more recently the devastating impact of COVID-19 on the economies and livelihoods, Lazzarini reiterated the centrality of UNRWA to the lives of Palestine refugees.

Lazzarini warned that the Agency’s financial situation was very precarious, which adds to the distress of the refugees, UNRWA staff and host countries. “UNRWA is one of the last anchors of predictability for a community that is among the most vulnerable in the region. It needs the political and financial support of its partners to be able to continue its role, particularly in critical fields such as health, education and social safety net.”

The meetings presented an opportunity to brief interlocutors on the socioeconomic situation of Palestine refugees in the five fields of operations and discuss implications of support to UNRWA in the broader international, European and regional contexts.