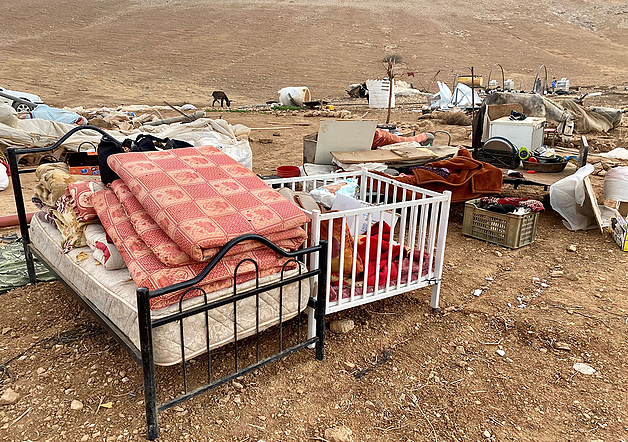 Israeli demolitions in the occupied West Bank aim to ethnically cleanse the Palestinians and displace them from their own land. (File photo via UN)

The Israeli stop work and demolition orders issued today against five agricultural structures in the town of Kufr al-Dik, west of the northern West Bank city of Salfit, is ethnic cleansing, according to Abdullah Kmail, governor of the Salfit district.

“The notices to stop the work and construction of agricultural rooms in Kufr al-Dik handed over by the occupation forces came after a series of continuous attacks, which are part of the systematic policy of ethnic cleansing carried out by the occupation with the aim of annexing land and expanding Israeli settlements at the expense of our land,” said Kmail in a statement quoted by WAFA news agency.

Kufr al-Dik mayor, Mohammad Naji, told WAFA that the targeted rooms are located in the north of the town and belong to five local residents.

He said the owners were given one month to object to the orders, which is not enough to prepare the legal papers.

Kufr al-Dik is facing daily attempts by the occupation authorities to prevent its expansion through demolition and stop construction orders while at the same time illegal Israeli settlements keep creeping on Palestinian lands in the town.