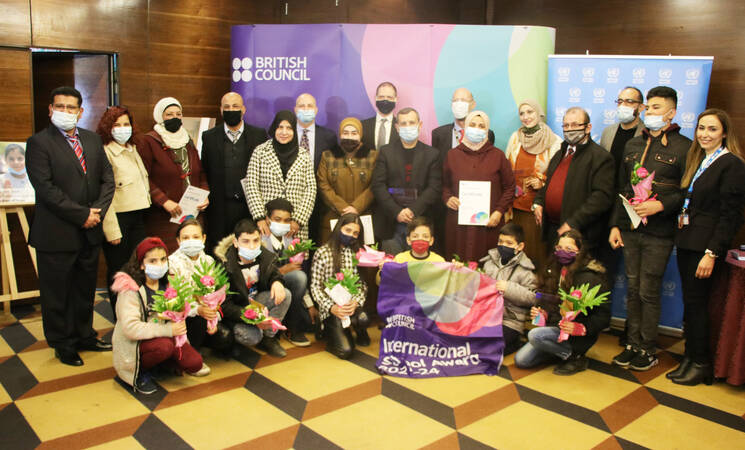 Collard said: “We are delighted to recognise seven UNRWA schools today and congratulate principals, teachers and students for all their hard work, with thanks to British Council colleagues for their implementation of the Connecting Classrooms project in partnership with FCDO and UK Aid. This forms part of the UK’s wider commitment to UNRWA and to the Palestinian communities including in Lebanon.”

Thanking the British Council for this recognition, the Director of UNRWA Affairs, Lebanon said,” That is an important achievement, especially given the difficult circumstances in which our students live. They are the real heroes.”

Granted by the British Council, a UK-based organization specializing in international cultural and educational opportunities, the honour celebrates schools that are successfully preparing students to be responsible global citizens by embedding international education into their curricula, in addition to communicating and partnering with schools across the world. It is one of the most important awards that schools around the world apply for under the supervision of the British Council.

The award is part of its Connecting Classrooms program, which seeks to foster international literacy in participating schools’ curriculums so that young people gain the cultural understanding and skills they need in today’s world.

Award accreditation is achieved by schools that complete collaborative and curriculum-based projects and activities with a number of international partner schools across the Middle East, Asia, and the United Kingdom.

Schools need to submit evidence of the impact of international strategies and activities and demonstrate the engagement of the school with international project activities. Evaluation takes approximately twelve months to complete and successful schools are accredited for three years.

Knox, the Director of the British Council in Beirut, congratulated the children, the teachers and the UNRWA school principals: “The seven schools we are recognizing today join a global community of over 10,000 schools that have the ISA award and that means you are part of a global community.”

UNRWA students across the Middle East are excelling in the classroom and building the skills they need to live out the UN values of human rights, tolerance, neutrality, equality and non-discrimination. Between 2021 and 2022, 45 UNRWA schools across the Gaza Strip, 14 in the West Bank, 14 in Jordan and seven in Lebanon have been named winners of the ISA.

In Jordan, where 14 UNRWA schools were selected, the ISA awards were celebrated on 16 September 2021 in a virtual event attended by the Director Marta Lorenzo.

Congratulating the UNRWA students via Twitter, Lorenzo said, “[I am] proud that a young generation of active citizens is practicing universal values of mutual understanding, solidarity, tolerance and respect for diversity.”

Speaking at the ceremony in Beirut, UNRWA student Mohammed Miari (16) from the Besan School in Ein El Hilweh refugee camp spoke about the value of learning about the Sustainable Development Goals (SDGs) and the impact they have on students’ studies and daily lives. He added, “This gave us an understanding of the concerns of other children around the globe. Outside of our walls and our schools, we were able to travel and learn about other children and their way of life at home or at school. We have, indeed, become Palestinian and global citizens.”